Cottonwood AZ (January 29, 2016) – One of the world’s foremost fingerstyle guitarists and harp-guitarists, Muriel Anderson is the first woman to have won the National Fingerstyle Guitar Championship. Muriel Anderson will perform for one night only, at the Old Town Center for the Arts, Saturday, February 6th at 7:00 PM.  Muriel’s “Wunderlust” concert is a virtual tour around the world in music and imagery.

Muriel Anderson’s new Audio-visual show,”Wonderlust” is a must-see as well as a must-hear! Her world-renowned guitar and harp guitar playing is highlighted by a backdrop of stunning visuals by celebrated photo-artist Bryan Allen. The first woman to win the National Fingerstyle Guitar Championship, Muriel has performed with country legend Chet Atkins, jazz great Les Paul, and continues to thrill audiences with her unique and joyous style. 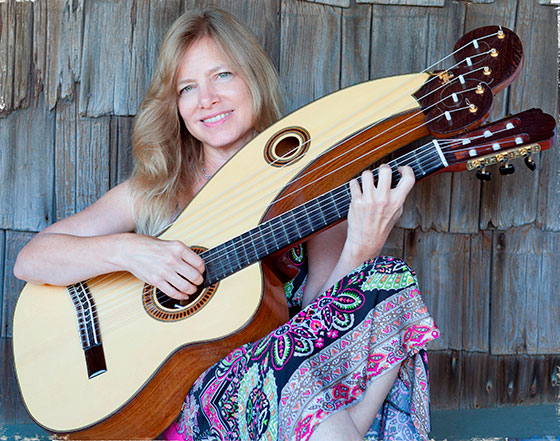 Currently named by Guitar World as one of 8 amazing female acoustic players, Muriel Anderson is one of the few international touring harp-guitarists. Her obvious joy of music, humor and her facility across the genres of folk, classical, jazz, bluegrass and international music is revered by guitarists worldwide. An engaging performer, Muriel’s unique approach to the instrument virtually transforms the guitar into a lyrical choir, then a marching band, then a Japanese koto, then a Bluegrass band, one minute launching into a Beatles’ tune and the next, a Rodrigo concerto. Muriel is host of the renowned Muriel Anderson’s ALL STAR GUITAR NIGHT® and founder of the MUSIC FOR LIFE ALLIANCE charity.

“Muriel Anderson is a good friend and a great guitarist.  She deserves national recognition”
…Chet Atkins

“Just one hell of a great player …a great personality and what I like is the touch that Muriel has on the guitar, the way she plays it like we all wish to play.”
…Les Paul

About the Visuals for her ‘Wunderlust’ show:  When Muriel first encountered Bryan Allen’s work, she knew she had found her artistic soulmate–she was amazed to find that his photo-art was saying the same thing as her music. They went on to create the 11-award winning Nightlight Daylight CD, and in the process discovered that their artistic affinity extended to the heart. They started working on how to combine their artistry in a live context, and this show is the result. Bryan’s stunning visuals provide an insightful backdrop to Muriel’s music, accentuating the audience experience as never before. Together they bring you on a journey around the globe, full of joy and humanity, with new tunes, old favorites, stories and images.

Join us for Muriel Anderson, Saturday, February 6th,  at 7:00 PM. Old Town Center for the Arts Is located at 5th Street & Main in Old Town Cottonwood. Tickets for Muriel Anderson are $20 in advance, $22 at the door, and $25 for priority seating in the first three rows. Tickets are available online at showtix4u.com. Tickets are also available in Cottonwood at: Desert Dancer, and Mt Hope, In Sedona: Local Juicery.  For upcoming events, visit www.oldtowncenter.org. For further information, contact Elena Bullard at 928-634-0940.