Watch out for venomous critters as the weather warms

Snakes and more ready to emerge

Phoenix AZ (March 24, 2013) – While spring continues to maintain its erratic grip on daytime temperatures, the inevitable emergence of snakes, spiders, scorpions, and lizards remains just around the next upward swing.

The Arizona Game and Fish Department is reminding the public that some simple rules can help the public avoid a potential dangerous encounter.

“Probably the simplest rule is to always know where you are putting your hands and feet,” said Zen Mocarski, information and education program manager for the Game and Fish Region 3 office in Kingman. 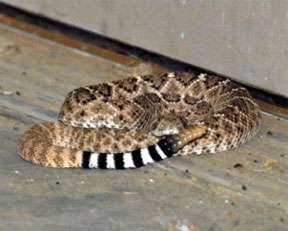 Mocarski said in the spring many snakes will be seeking the warmth of the daytime sun, but during the heat of summer will seek out shade during the day and do most of their hunting during the evening hours.

“Rattlesnakes are synonymous with Arizona,” he said. “As well they should be. We have 13 species of rattlesnake in this state.”

The most common throughout the state is the western diamondback, but where many rattlesnakes are found will depend on the existing environment. The dubious sidewinder is found in sandy areas while the black-tailed can be found from elevations ranging from nearly sea level to 9,000 feet.

“But the rules for all these snakes is to know where you are placing your hands and feet,” Mocarski said. “While accidental bites can occur, following this one simple rule can help people avoid the majority of encounters.”

“There’s no such thing as an ordinary rattlesnake bite,” Mocarski said. “People often ask me which is the most dangerous rattlesnake and my reply is simple: ‘the one that just bit you.'”

While the Mohave is widely accepted as having the most potent venom, the diamondback, as the most common rattlesnake, accounts for the most bites and deaths.

While less common within city limits, Mocarski said rattlesnakes can certainly find their way into the urban environment, as can spiders and scorpions.

“There are two spiders considered a threat to humans in Arizona; the black widow and brown spiders,” Mocarski said.

Most spider bites will not require medical attention, but individuals should pay attention to the reaction.

“Everyone reacts differently to venom,” Mocarski explained. “The best course of action is to contact a poison control center and listen to the advice from medical professionals.”

As for scorpions, Mocarski said the sting of most species is a bit more severe than that of a bee.

“But remember, there are people out there who can die from a single bee sting,” he warned. “The bark scorpion is the only scorpion considered a threat to people in Arizona, but anyone stung should always pay attention to how they are reacting.”

Mocarski said young children are of particular concern due to their natural curiosity.

“They want to explore their environment, so it is important to begin their education at a young age,” he explained. “Keep the message simple with those very young, such as ‘come get mommy or daddy if you see anything in the house.’ And teach them not to pick up anything.”

As for lizards, Mocarski said the only one dangerous to humans is the same one that can be easily avoided: the Gila monster.

“It wants nothing to do with people,” Mocarski said. “Leave them alone and they’ll leave you alone. While I’m sure there has been an accidental bite somewhere throughout history, I’ve yet to hear about it.

“And remember, the Gila monster is protected in Arizona, so it is against the law to disturb, harass, or remove these animals from the wild.”