ADOT and its plows are prepared for winter weather.
Are you?

Verde Valley AZ (November 14, 2017) – With winter on the horizon, the Arizona Department of Transportation has spent months preparing for snow and ice that storms will dump on the state’s higher elevations.

ADOT has 375 certified snowplow operators ready to operate the agency’s nearly 200 snowplows, which are stationed around the state to keep people and commerce moving when snow falls on highways.

Now it’s time for drivers to do their part, starting with following essential safety tips available at azdot.gov/KnowSnow to prepare themselves and their vehicles for winter travel. That includes slowing down, leaving extra room behind the next vehicle, taking along warm clothing, blankets, food and water, and packing an emergency kit. 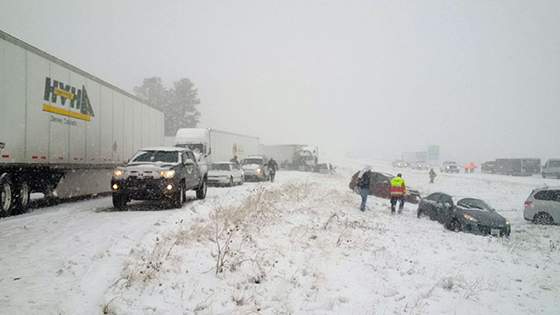 Your preparations should include staying apprised of weather conditions and being ready to postpone travel so ADOT’s snowplows can clear roadways. A highway takes much longer to plow when it’s jammed with vehicles that had no business traveling on a roadway that’s slick with snow and ice. That happened last Christmas Eve, when a powerful storm dropped inches of snow per hour, closing a long stretch of Interstate 40 in a tangle of crashes and stranded vehicles that took many hours to clear.

A snowplow can’t clear a highway if it’s pulled out of service when another vehicle hits it. That happened several times last winter, fortunately without significant injures. Every vehicle, from semis to passenger cars, needs to give snowplows room to work – a minimum of four vehicle lengths to allow room to stop.

Avoid passing a snowplow that’s clearing a highway until the driver pulls over to let traffic pass. Never assume a snowplow operator knows your vehicle is nearby. If you can’t see the plow driver, there’s a good chance the driver can’t see you.

Always remember: The safest place on a highway when it’s snowing is behind a snowplow.

Heading to sled and throw snowballs? Do that in designated areas away from highways, not parked on shoulders, which are for emergencies only. Parking on a highway shoulder to play in the snow distracts other drivers and can interfere with first responders who may need to use the shoulder. If that isn’t reason enough, keep in mind that a snowplow can hurl large amounts of snow and ice well away from a highway.

ADOT recently installed signs along a stretch of US 180 northwest of Flagstaff reminding drivers that parking on the shoulder is for emergencies only.

Those heading to popular snow-play areas should be prepared to spend extended time in winter conditions, as traffic at day’s end is often heavy on highways including US 180 toward Flagstaff. In addition, highways can have extended closures from crashes and weather conditions.

Prepare for trips by visiting the ADOT Know Snow website (azdot.gov/KnowSnow), which has tips on making sure your vehicle is ready for winter driving, driving safely on highways with snow and ice, driving safely while snowplows work and packing supplies in case a vehicle becomes stranded. For example, a little cat litter or sand will provide traction if a vehicle becomes stuck along the roadway.

Before heading out, drivers can call 511 or visit ADOT’s Arizona Traveler Information site at az511.gov for the latest highway conditions. The website features real-time images along state highways that give drivers a glimpse of weather in various regions. ADOT’s Twitter account (@ArizonaDOT) and Facebook page (facebook.com/AZDOT) are sources of real-time information and interaction.

When a freeway closure or other major traffic event occurs, ADOT’s free app available at ADOTAlerts.com will send critical information directly to app users in affected areas – where possible, in advance of alternate routes.