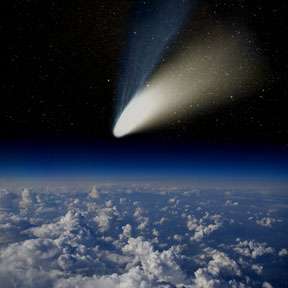 There is something happening out there and we can’t deny it any longer. Too many comets and asteroids are appearing out of nowhere almost daily. There was a meteor explosion in Russia. A giant asteroid just misses us on a cosmic scale and now three- recently discovered comets are buzzing or about to buzz the earth. It’s time for a closer look.

Basically, asteroids are broken rocks of different sizes that orbit the sun at various angles.

Meteors are smaller pieces of rock or metal orbiting the sun that sometimes enter earth’s atmosphere when orbits intersect.

Asteroids also circle the sun in a ring called the asteroid belt. The belt orbits the sun between Mars and Jupiter. 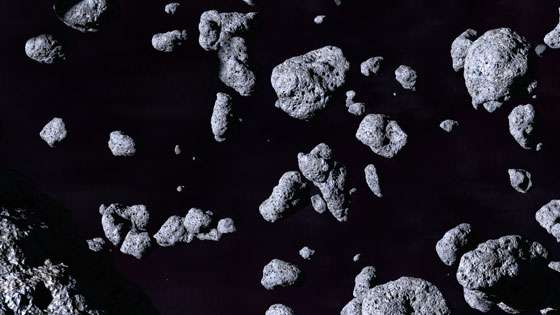 The planet, for some reason, exploded and its pieces were sent hurtling into space and then were pulled back towards the sun by gravitational forces to form elliptical orbits around it.

The pieces that were not hurled out of orbit formed the asteroid belt as they spread out along the ecliptic plane of the planet that exploded.

It has also been postulated that gravitational perturbations from Jupiter prevented the primordial solar nebular planetesimals (basic material from which planets form) to accrete and what we are seeing in the asteroid belt are simply pieces of an unformed planet.

But this theory falls apart because the asteroids in the belt would have all been round after cooling and not jagged and broken. And since all the planetismals in the solar system were accreting at the same time Jupiter would have had no gravitational influence to cause collisions in its ecliptic plane.

Comets are said to be composed of dust, ice and gasses.

It is hypothesized that these comets reside in a place just outside Pluto’s orbit called an Oort Cloud, named after the individual who claims it exists.

He believed comets are pieces of the elemental universe that have been “left over” and occasionally get sucked into orbits around the sun by its gravitational pull.

Over history records of comet approaches have been kept and most come, leave and return in predictable periods.

Over the last month, two comets have been discovered for which no kept history exists.

Also, a meteor came out of nowhere and exploded over Russia. There was an asteroid “near miss” on the same day.

And near this year’s end, a monster comet is predicted to fill the skies. The earth will get its closest near-miss by an asteroid ever. It is named after an Egyptian god of ultimate death.

Are these simply cosmic coincidences or do they foretell of things to come?

Which is a more plausible explanation of their existence?

Or was there a terrestrial planet between Mars and Jupiter that had water and gasses, perhaps even an atmosphere, that was torn apart by the gravitational tug-of-war between the Jupiter and the sun?

The ensuing explosion would have sent the planet’s water, dust and gasses hurtling into space, like the asteroids, to form orbits around the sun.

In the vacuum of space the gasses, dust and water from the exploded planet would congeal into orbs that would be subject to the same gravitational forces the asteroids are.

Thus, comets and asteroids orbit the sun from various angles and for different lengths of time depending on how far and in what direction they were hurled when the planet exploded.

Comets and asteroids come from the same place.

As a comet approaches the heat and light of the sun three things happen: gasses expand; ice melts; and dust is freed.

The comet’s coma expands around its center, forming an orb of gasses that light up in a “V” shape when sunlight shines through the comet’s icy, prism-like core and through its luminescent coma. A coma could be millions of miles wide.

That is why the light tail of a comet always points directly away from the sun while its tail of dust, which is blown backwards by the solar wind, points away on an angle.

It’s known that often comets travel with smaller pieces of the exploded planet called meteors. There are numerous meteor events associated with the coming and going of comets.

A quick perusal through the internet by Googling: Apophis Asteriod; ISON Comet; Comet Lemmon; Comet Pan STARRS; and the Russian meteor is a good place to begin to get a better picture of what could be happening here.

Coupled with an ecliptic-plane alignment of the solar system’s planets, the gravitational force exerted on the planet that used to orbit between Mars and Jupiter caused it to explode.

The solid pieces, water and atmosphere of this planet that were blown away first got sent out the farthest because they went out with the most force, meaning their orbits would be the longest around the sun.

With the Galaxy now aligned like it was back then, those chunks could be about to complete their first recorded journey around the sun.

Could this be why so many comets and asteroids are being spotted for the first time heading in our direction?

Now the question arises, with so many new celestial bodies whizzing or about to whiz past the earth, are we seeing the beginning of a cosmic event of grave consequence?

Could a cluster of comets, asteroids and meteors be sharing the same solar orbit and are about to be discovered heading straight towards us in the coming weeks and months?

We saw what that meteor did to a city in Russia the same day of a fly-by of a pretty hefty size asteroid last month.

Officials said there was no correlation between the meteor and asteroid but could they have been a part of the leading edge of the approaching debris from the exploded planet? 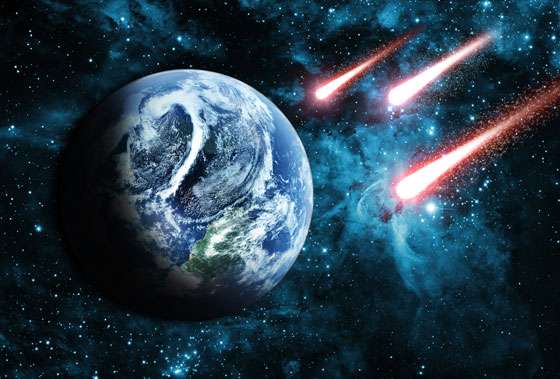 But at least we will get a great celestial show out of it — before the curtain call.

Check out Comet Pan STARRS this weekend in the West horizon at sunset appearing near the rising-crescent moon.