The slam will the fourth of the 2011-12 season, which has been more moving, more energetic and more intense because this year as poets compete for a slot in Sedona’s first National Poetry Slam Team.

After four years of collaborating with the Flagstaff and Phoenix metro area poetry slam scenes, the Sedona scene has the reputation and strength to send its own team to the 2012 National Poetry Slam in Charlotte, N.C., in August. The eventual four-poet team will share the stage with 300 of the top poets in the United States, Canada and Europe, pouring out their words in a weeklong explosion of expression. 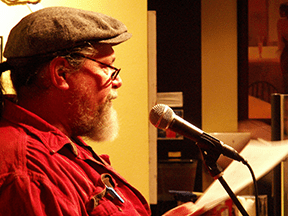 Before Campana blazed into the Mesa and Phoenix poetry scene in 1997, individuals would attend poetry readings and at the end of every dry, polished piece of mental origami, read with all the flair of a zoning law variance, those still awake in the audience would say “humph.” Poets would get a smattering of courtesy applause, and everyone would go home feeling just a little more cultured than their neighbors who owned television sets.

Campana, however, knows that the only true way to respect culture is to break it into little tiny pieces. He came onto the poetry scene at full power, and suddenly the dry dusty notebooks of lesser poets got burned up in the shockwave.

Campana is the atom bomb that levels ivory towers. He got people excited enough about poetry to come back for more, and to see what would happen next. Soon, the audience was too big for the coffeehouse, a feat unprecedented since Socrates dared the baristas to make him a hemlock frappuchino.

Campana began writing poetry at the age of 17, quit at 22 because he realized that he had nothing to say. Twenty years later, he picked up where he left off, soon ran out of things to say again but has not stopped writing.

A member of five Mesa National Poetry Slam Teams, Campana has been to the semi-finals of the National Poetry Slam twice. He has hosted and featured across the Southwest, and continues to write at a feverish pace, always challenging fellow poets to better their craft on the page and the stage.

Campana takes elements of other art forms and applies them to his poetry. Although audiences can’t hear the music, he insists it’s in there in tributes to composition. Although audiences can’t see the paintings and photographs they are there behind the words. Campana currently lives on the fine line that separates the page from the stage. From there he can reach people from both spectrums of modern poetry. Campana runs the weekly Sound Effects poetry open mic called in Phoenix.

Campana also recently released a compilation album, “The Hit List,” that features 94 poems composed over the last 10 years of his performance career in Phoenix.

The April 7 slam will be hosted by Graham, who represented Northern Arizona on the Flagstaff team at five National Poetry Slams between 2001 and 2010.

All poets are eligible in the slamoff except those already confirmed members of or coaching another National Poetry Slam or College Unions Poetry Slam Invitational or Brave New Voices team. Poets can compete for multiple teams during a season and still be eligible to compete in the Sedona team.

Tickets are $7 in advance and $12 the day of the event, available at Golden Word Books and Music, 3150 W. SR 89A, and online at studiolivesedona.com.