Award-winning ‘Watermark’ premieres
at Fisher Theatre on May 1

Sedona AZ (April 19, 2014) – The Sedona International Film Festival is proud to present its premiere series with the one-night-only debut of the award-winning documentary “Watermark” on Thursday, May 1. There will be two shows at 4 and 7 p.m. at the festival’s Mary D. Fisher Theatre.

Every living thing requires water. We humans interact with it in a myriad of ways, numerous times a day. But how often do we consider the complexity of that interaction? And, unless confronted by scarcity, when do we meditate on its ubiquity in creating, sustaining and enriching life?

“Watermark” is a feature documentary film that brings together diverse stories from around the globe about our relationship with water: how we are drawn to it, what we learn from it, how we use it and the consequences of that use. We see massive floating abalone farms off China’s Fujian coast and the construction site of the biggest arch dam in the world – the Xiluodu, six times the size of the Hoover. We visit the barren desert delta where the mighty Colorado River no longer reaches the ocean, and the water-intensive leather tanneries of Dhaka.

We witness how humans are drawn to water, from the U.S. Open of Surfing in Huntington Beach to the Kumbh Mela in Allahabad, where thirty million people gather for a sacred bath in the Ganges at the same time. We speak with scientists who drill ice cores two kilometers deep into the Greenland Ice Sheet, and roam the sublime pristine watersheds of Northern British Columbia. 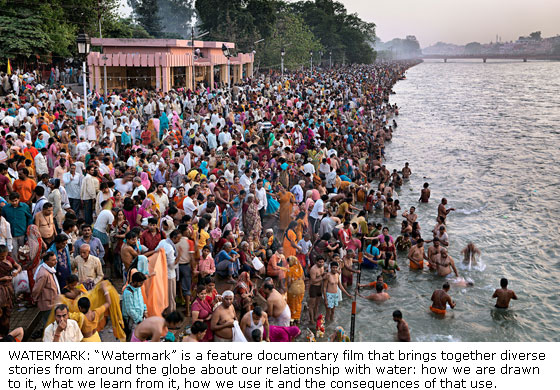 Shot in stunning 5K ultra high-definition video and full of soaring aerial perspectives, this film shows water as a terraforming element and the scale of its reach, as well as the magnitude of our need and use. This is balanced by forays into the particular: a haunting memory of a stolen river, a mysterious figure roaming ancient rice terraces, the crucial data hidden in a million year old piece of ice, a pilgrim’s private ritual among thousands of others at the water’s edge.

In “Watermark”, the viewer is immersed in a world defined by a magnificent force of nature that we all too often take for granted – until it’s gone.

“Watermark” will be shown at the Mary D. Fisher Theatre on Thursday, May 1 at 4 and 7 p.m. Tickets are $12, or $9 for Film Festival members. For tickets and more information, please call 928-282-1177. Both the theatre and film festival office are located at 2030 W. Hwy. 89A, in West Sedona. For more information, visit: www.SedonaFilmFestival.org.