Young Voices to be Heard Receives Grant from Sedona 30

The students in attendance were told by their mentor, Ya’ir “Christopher” Lane, that they would receive a surprise later in the meeting. “Is it pizza?” Mackinzi Taylor, a Junior at Sedona Red Rock High School, asked. “Nope, way better!” replied Lane. 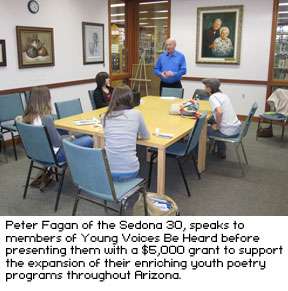 Taylor’s face turned to shock when Fagan presented the group with a $5,000 check. Claire Pearson, 16, exclaimed, “This is going to help us spread poetry everywhere!”

YVBH plans to use the grant money to expand their youth poetry programs in Arizona. “Our goal as an organization is to bring spoken word poetry to as many rural communities as possible,” says Lane.

They have already formed partnerships in Phoenix and Tucson, and are now reaching out to students in Seligman, Bullhead City, Orme, Flagstaff, and Kingman. In April, they will perform spoken word poetry for a K-12 school in Dalton Springs, near Kingman, presenting workshops for over three hundred students.

“These rural communities simply don’t have the opportunities we have here in Sedona,” says Lane. Chamelea Mullican, 16,  finishes, “Helping other people express themselves in a new way…it’s like lighting something new in them that could stoke.”

Part of the grant will also be used to send the group to Brave New Voices, an International Slam Poetry Youth Convention coming up in July. Brave New Voices was recently featured in the documentary, “Louder Than a Bomb” which has received international acclaim, and is currently airing on Oprah’s OWN Network.

Fagan says that his personal desire to support YVBH stemmed from his work with another organization, Futures For Children, which creates Youth Leadership programs for American Indian children in tribal communities in New Mexico.

“We are forming future leaders here,” says Fagan, “When kids learn how to get up and talk in front of people, a lot of things can happen.”

The Sedona 30 was founded in 1982 by a group of civic-minded individuals who wanted to improve the quality of life for the citizens of Sedona. Through their own donations, they have supported numerous local organizations with donations totaling more than $500,000. They are currently working to bring live entertainment to Sedona’s Performing Arts Center. The first scheduled performance is “A Tribute to John Denver” on Thursday, January 12, 2012 at 7:00 p.m. Tickets are available by calling (928) 282-1177.