… I turned my alarm off at 5AM Sunday morning and fortunately awoke at 6:09AM which allowed me to get up and ready before Eric and Jim picked me up at 6:30AM to go and shoot some Vermillion Fly Catchers which are among the most beautiful little birds I have seen … Arizona is near the northernmost regions of their range and Eric knew exactly where to find them. 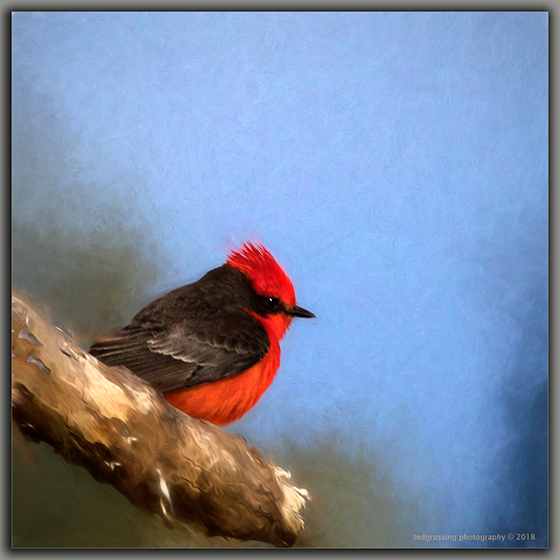 I wish I could say that I got a lot of good shots … I didn’t, but I did get a few and this is one of them. I did a lot of tree trimming in the process of cleaning the image up and decided to convert the image into a work of photographic art, but keep the original image and have the Vermillion Fly Catcher as shot. Anyhow it was a very fun morning and we stopped for lattes/coffee/and a real beverage on the way home … REALLY

Busy day once home with a number of tutorials from Adobe Live on YouTube … they have some great ones and my preference is Terry White for the subjects he covers. The thing I like about the YouTube tutorials as opposed to manuals is that you get to see what happens as corrections and adjustments are made and you learn which of the many tools in Photoshop or other apps are worth using.

Another day underway and methinks it shall be a very good one … keep breathing and smiling!