Steve Coogan and Rob Brydon are back together in comedy at Mary D. Fisher Theatre

After jaunts through northern England and Italy, Steve Coogan and Rob Brydon embark on another deliciously deadpan culinary road trip. This time around, the guys head to Spain to sample the best of the country’s gastronomic offerings in between rounds of their hilariously off-the-cuff banter.

Over plates of pintxos and paella, the pair exchange barbs and their patented celebrity impressions, as well as more serious reflections on what it means to settle into middle age. 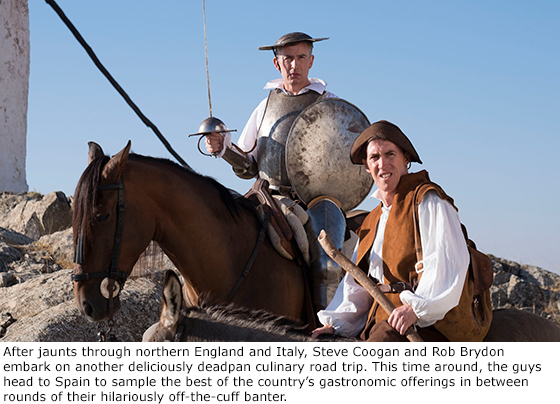 As always, the locales are breathtaking, the cuisine to die for, and the humor delightfully devilish.

“I like Spain. I thought the landscape would be good, I thought the food would be good. I also think the whole Don Quixote and Sancho Panza story, the most famous story from Spain, sort of fitted Steve and Rob well,” said writer/director Michael Winterbottom.

“The funniest film of 2017. The best meals in life are worth eating thrice, and this one has been simmered in tangy new spices and aged to perfection.” — David Ehrlich, IndieWire

“Coogan and Brydon are wonderful together again.” — Alison Willmore, BuzzFeed