Sedona AZ (March 18, 2018) – The Royal Shakespeare Company’s extraordinary new production of “Twelfth Night” makes its Sedona big-screen debut on Monday, March 26. The Sedona International Film Festival hosts the high-definition premiere of William Shakespeare’s renowned play from its home in Stratford-Upon-Avon. There will be one show at 4 p.m. at the festival’s Mary D. Fisher Theatre.

“Twelfth Night” is a tale of unrequited love — hilarious and heartbreaking. Two twins are separated in a shipwreck, and forced to fend for themselves in a strange land. The first twin, Viola, falls in love with Orsino, who dotes on OIivia, who falls for Viola but is idolized by Malvolio. Enter Sebastian, who is the spitting image of his twin sister. 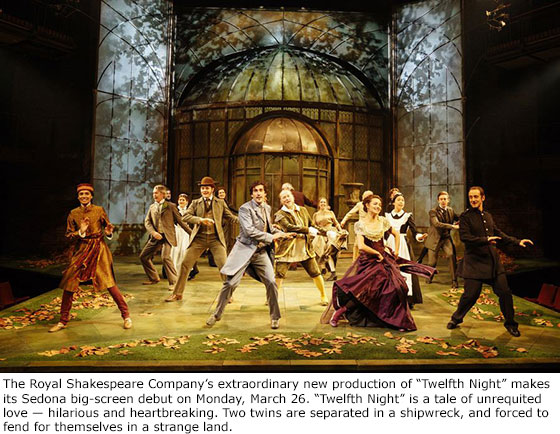 Christopher Luscombe, director of “Love’s Labour’s Lost” and “Much Ado About Nothing” (2014 and 2016), returns to the Royal Shakespeare Company to tackle Shakespeare’s greatest comedy, a brilliantly bittersweet account of “the whirligig of time”.

“Lavish and uplifting.” — The Stage

The Royal Shakespeare Company (RSC) is one of the world’s best-known theatre ensembles. The Company focuses on works by Shakespeare, other renaissance dramatists and contemporary writers. The RSC is dedicated to attracting and inspiring the best artists both on stage and behind the scenes, to produce performances of the very highest standard. So, wherever you experience the RSC, you experience work that is made in Shakespeare’s home town.

Shakespeare has been performed and celebrated in Stratford for centuries and the RSC has trained generations of the very best theatre makers since the Company was founded in 1961.  The Royal Shakespeare Company pioneers contemporary approaches to Shakespeare’s plays, as well as staging the work of those who inspired him and the work of today’s playwrights.

“Twelfth Night” will be shown at the Mary D. Fisher Theatre on Monday, March 26 at 4:00 p.m. Tickets are $15, or $12.50 for Film Festival members. Tickets are available in advance at the Sedona International Film Festival office or by calling 928-282-1177. Both the theatre and film festival office are located at 2030 W. Hwy. 89A, in West Sedona. For more information, visit: www.SedonaFilmFestival.org.