Phoenix AZ (March 24, 2014) – Are we ready for the next steps of knowledge and understanding about leading-edge and forward-leaning scientific, psychological and spiritual discovery connected with unidentified flying objects (UFOs) and other unusual topics?

The annual screening of the award-winning documentary film “The Phoenix Lights” in Scottsdale, Arizona, on March 16, along with comments by special guests present, provided opportunities for the audience to consider the possibilities involved with the 1997 case and the many apparent connections to it.

People around the world are familiar with the March 13, 1997, sighting of very large object or craft gliding slowly over the metro Phoenix area that evening. But not everyone realizes that there may have been multiple objects in Phoenix’s skies that night, and that glowing amber orbs have been seen in the Phoenix region in years before and since.

Unconventional flying objects and other unusual situations have also been reported (and often seen and experienced but not reported) throughout Arizona, including Sedona, the Navajo Nation, Hopi lands and the Four Corners area.
These kinds of phenomena may go back years, decades or centuries. Some of them may be a very natural part of life in the American Southwest and elsewhere on Earth.
It seems that we are now getting more educated about many of these discoveries. Yet, there are still mysterious unknowns about what is going on.
PHYSICIAN STEPS UP TO THE PLATE 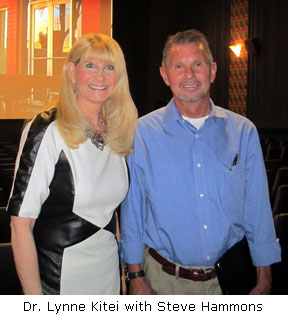 Lynne Kitei, M.D., writer-producer-director of “The Phoenix Lights” film (based on her book), hosted the recent gathering at a Scottsdale movie theater, shared insights with the those present and introduced several guest speakers who made brief comments and responded to questions from the audience. The co-producer of the film, Steve Lantz of Steve Lantz Productions, also participated in the event.
Kitei noted that two years before the 1997 incident, she observed large, glowing amber orbs near the Estrella Mountains on the south side of Phoenix. Other people in the Phoenix and Arizona region have also reported seeing orbs of various sizes and types.
The audience learned that the Spanish word “estrella” means “star” and that local Indians have long-believed that the “star people” come and go in the area of the Estrella Mountains.
When the main Phoenix lights incident occurred in 1997, Kitei also saw the huge object or craft, along with thousands of others in the Phoenix metro area. She and many others came forward and reported what they had witnessed that evening.
Even the governor of the state at the time eventually revealed that he, too, had seen a huge boomerang-shaped craft gliding silently and slowly at a very low altitude over Phoenix.
The lights and/or a boomerang-shaped object were reportedly witnessed earlier that evening northwest of Phoenix in Henderson, Nevada, (metro Las Vegas), then in Kingman in the northwest corner of Arizona, and in Prescott, Arizona, before appearing over the northwest corner of metro Phoenix heading southeast.
Since Kitei had been involved in health-education media production projects and had a background in the performing arts as well as health care, she subsequently made significant public efforts to explore, communicate and educate about what occurred that night.
Her book “The Phoenix Lights: A Skeptic’s Discovery That We Are Not Alone” and the documentary film were part of the results of those efforts.
At the film event, Kitei also shared interesting and funny inside stories about her small role as “Florence Arizona” in the quirky1987 Coen Brothers’ movie “Raising Arizona” starring Nicholas Cage, Holly Hunter and John Goodman. The movie was filmed at locations throughout the Phoenix region.
GUESTS PROVIDE INSIGHT
Other special guests at the annual film screening included Rebecca Hardcastle, Ph.D., proponent of a concept called “exoconsciousness.” Hardcastle explained that exoconsciousness is the study and development of certain communication skills that include awareness about and telepathy with advanced beings of various kinds.
Jim Dilesttoso, a multi-skilled technical expert who was prominently featured in the film, was also present. He had analyzed photos of the Phoenix lights incident using advanced technical equipment. Dilettoso determined that the lights were not military flares dropped during training of A-10 “Warthog” aircraft at the nearby defense gunnery range south of Luke Air Force Base that night.
Dilettoso noted that he has also conducted other interesting research into unusual phenomena in the Four Corners region.
Two law enforcement officers from the Navajo Nation, Navajo Rangers John Dover and Stan Milford, told the audience about several types of unusual situations they have investigated over the years. These incidents included, but were not limited to UFOs, they said.
Their investigations as peace officers indicate to them that modern physics theories are consistent with ancient Navajo oral history indicating that there may be multiple dimensions, some of which are invisible to us at this time.
An elder and medicine man from the Zuni nation in New Mexico, Clifford Mahooty, explained that the “star people” have been around for a long time, in his view. Mahooty also compared the ability to perceive the star people, other anomalous phenomena and the concept of multiple dimensions with tuning a radio to different stations on the AM and FM frequency bands.
Officers of the Arizona Mutual UFO Network (MUFON), State Director Jim Mann and Assistant State Director Stacey Wright, told the audience about the missions, roles and investigations that MUFON carries out. Chief Investigator for Arizona MUFON Dennis Freyermuth was also introduced.
WHERE DO WE GO FROM HERE?
Some people have speculated that there must have been a purpose for the March 13, 1997, flyover. By all accounts, it was a UFO sighting that had special aspects to it. The case remains unique among decades of worldwide UFO sightings due to the large number of witnesses observing the object(s) for a prolonged period of time over a major well-known city.
Why did it occur in the early- and mid-evening hours on a pleasant evening when many Phoenix-area residents were already outside looking to the skies for a view of the much-publicized Hale-Bopp comet that was expected to provide quite a show?
One possible answer that has been put forward: The flyover was a planned show of a different kind, even more spectacular than seeing the Hale-Bopp comet. It may have been a demonstration, a test or a preparation.
This is consistent with theories and accounts that various kinds of acclimation efforts and activities may have been underway since the 1940s, at least in the U.S., to prepare us for new discoveries that could be surprising.
And why Phoenix and Arizona? There are certain demographic factors that may play a part. These include a population of people who have moved to the area from all over the U.S. and other countries to enjoy the sunny skies and warm weather. There is also a rich mixture of different cultures and a large Native American population with several tribes.

Thousands of visitors and tourists from around the U.S. and around the world visit Arizona each year to visit the Grand Canyon and the many other beautiful sights in the state.

Another aspect of the area is the unique geography and biodiversity of the southern Arizona Sonoran Desert and the beautiful mountains in the state.
The geology of the Sedona area, a relatively short drive north of metro Phoenix, includes combinations of quartz, iron oxide and volcanic-related structures that reportedly create unique magnetic energy fields and vortexes. Some people speculate that these energy fields may affect human consciousness and could have other significant effects.
Whatever the reasons, it seems wise to be prepared for further developments in Arizona, public or more discreet, that will continue to allow us to discover and learn, and to develop as more advanced beings ourselves.
The general public, news and entertainment media, public health and safety agencies, defense and intelligence personnel, kids and senior citizens, and all of us probably benefit from increased readiness for continuing interesting unconventional developments.