Sedona AZ (April 21, 2018) – The National Theatre of London continues its season with its acclaimed production of Tennessee Williams’ “Cat on a Hot Tin Roof” showing in Sedona on Sunday, April 29 at 3 p.m. The Sedona International Film Festival hosts the big screen premiere at its Mary D. Fisher Theatre. 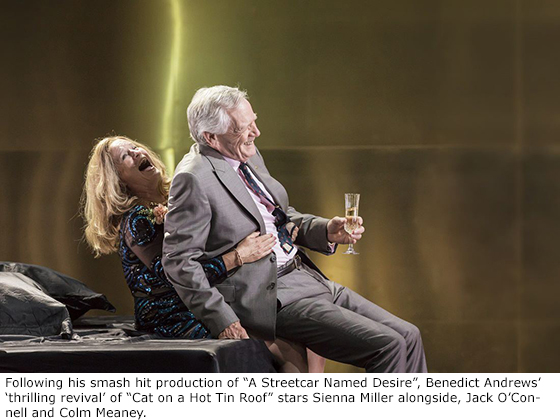 On a steamy night in Mississippi, a Southern family gather at their cotton plantation to celebrate Big Daddy’s birthday. The scorching heat is almost as oppressive as the lies they tell. Brick and Maggie dance round the secrets and sexual tensions that threaten to destroy their marriage. With the future of the family at stake, which version of the truth is real – and which will win out?

“Sienna Miller and Jack O’Connell get to a raw and naked truth.” — Metro

“Cat on a Hot Tin Roof” will be shown at the Mary D. Fisher Theatre on Sunday, April 29 at 3:00 p.m. Tickets are $15, or $12.50 for Film Festival members. Tickets are available in advance at the Sedona International Film Festival office or by calling 928-282-1177 or online atwww.SedonaFilmFestival.org. Both the theatre and film festival office are located at 2030 W. Hwy. 89A, in West Sedona.