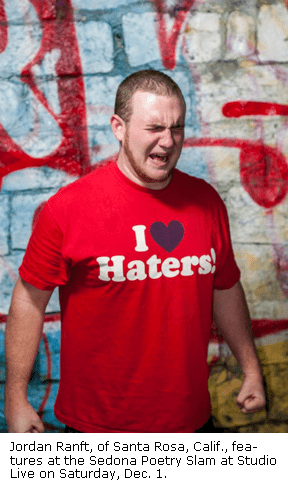 Jordan Ranft
Ranft loves poetry. He loves writing it, and he loves performing it. In the few years he has been practicing his craft he has taken the scene by storm. First starting performance career out in Colorado Jordan placed several times at the Mercury Cafe Slam in Denver.

Now residing in northern California he has performed all over the San Francisco Bay rea, won multiple slams, and has featured at several big events including the Northbay Poetry Slam, Desert Rocks Music Festival and the San Francisco How Weird Street fair. He derives his poetry from personal struggle and growth. His main goal is to be true to himself while putting on the most entertaining show he possibly can.

For more information please contact the Sedona Performing Arts Alliance/Studio Live at (928)282-0549. Tickets are available online at www.studiolivesedona.com or at the Studio Live box office located at 215 Coffeepot Drive in West Sedona.
The Sedona Performing Arts Alliance is a nonprofit organization, 501(c)(3) that serves as a catalyst for community development through quality arts programming. We are dedicated to the advancement of the performing arts through education, live performance and artist support.
studio live