Sedona AZ (October 29, 2017) – The Sedona International Film Festival is proud to join theaters around the world for the big screen debut of “Hello Again” — based on the celebrated off-Broadway musical and featuring an all-star ensemble cast. The production premieres in high definition for two shows only at the Mary D. Fisher Theatre on Wednesday, Nov. 8 and Sunday, Nov. 12.

“Hello Again” is a musical love affair spinning through time. 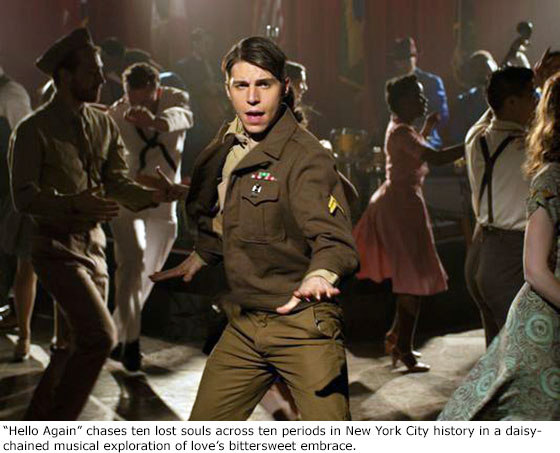 The pursued becomes pursuer as they slip in and out of one another’s arms, spinning through ten music-fueled vignettes which come together in one soulful circle.

“Hello Again” will be shown at the Mary D. Fisher Theatre on Wednesday, Nov. 8 at 7:00 p.m. and on Sunday, Nov. 12 at 1:00 p.m. Tickets are $12, or $9 for Film Festival members. Tickets are available in advance at the Sedona International Film Festival office or by calling 282-1177. Both the theatre and film festival office are located at 2030 W. Hwy. 89A, in West Sedona. For more information, visit:www.SedonaFilmFestival.org.