Sedona AZ (April 3, 2019) – April is when the spring kicks in and the fling is in the air. Arizona Music Hall of fame Icon Walt Richardson returns to the Sound Bites Grill Stage with his amazing Reggae Rock One Love Show, Saturday April 6th, 2019 7pm. Walt brings fellow musician friends, drummer, Gigi Gonaway, (Whitney Houston, Mariah Carey, Aretha Franklin), Lead Guitarist, Drew Hall, and Bass Guitarist, Marcus Weeden. This show will definitely get you on the dance floor or grooving in your chair.

“It is an incredible feeling to be able to fill the air with music and be a part of its marvelous effects on people.”…Walt Richardson 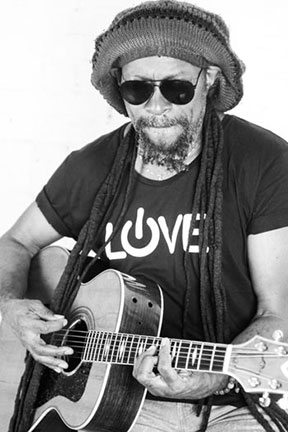 Walt Richardson has an incredible musical history. He is a self-taught musician who began to play guitar at age nine. He is largely influenced by the Beatles, Jimi Hendrix, Bob Dylan, Stevie Wonder, Bob Marley, and more. Taking akin to the groove style of playing, much like his influences, Walt plays rhythm guitar and feels the groove of the song is very important. The groove is a huge part of what music is to Walt! He has played his music all over the world and has had the opportunity to meet stellar artists like Carlos Santana, Burning Spear, Taj Mahal, sharing the stage with bands like Third World to Ziggy Marley.

Walt’s music is very broad, open, and reveals mixed genres. His original music derives from his own spin of folk, rock, reggae, and added African and Latin influences. Having started as a street musician and working his way up to world tours, Walt Richardson has always made his home in Tempe, Arizona. He celebrates Tempe in his songs! On Walt’s 60th birthday, The City of Tempe, AZ declared January 18th to be “Walt Richardson Day”. He was the first artist enshrined on the Tempe Music Walk of Fame.

I am a soul, living out and enjoying life as a songwriting, storytelling, and performing, musician…”-Walt Richardson.

Currently, Walt Richardson and his bandmates are working on new tracks for an upcoming CD compilation. The band will be playing some new tunes at the April 6th performance at Sound Bites Grill. The new CD compilation, (title, to be announced), is due to be released in the fall of 2019.

The band behind Walt also has great bios and has performed with some great musicians. They take Reggae to a different level with their own twist!

Walt Richardson & friends is a ticketed event and admission for the show starts @ $20.00. You may order off the dinner menu, or just enjoy cocktails and dancing! It is suggested to get tickets in advance by calling 928-282-2713.

Sound Bites Grill is open for lunch and dinner daily from 11:30 to 9 p.m. and on Friday and Saturday evenings until 10 p.m. Live music is performed most evenings. There is also seating on the patio with red rock views.

For Tickets and further information: call 928-282-2713 or visit www.soundbitesgrill.com