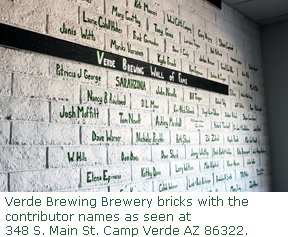 Alex Parris, a new Camp Verde resident, joined the Verde Brewing team this summer. He comes from a background of working in breweries and restaurants, and already has plans with Goetting to create two new Verde Brewing Beers this month, the Gold Buckle Ale and a Camp Verde Pecan beer.

Goetting and Parris plan to use the funding of the “Harvest Crops, Plant Hops” campaign to purchase new and more energy efficient kegs, harvest local grown hops at Bell Farms, purchase pecans from Windmill Farms, and help other local farms begin growing crops they will need for future beers.

The Gold Buckle Ale, named by Kickstarter contributor, Wood Cattle Company, as one of the awards from the first Kickstarter, will be created mainly with corn and barley; the VBC team wants to work with crops that are easily found in the Verde Valley. To get crops like corn and barley, the VBC team is already in the works with talking to local farms that will help grow and supple their high demand of ingredients.

Goetting is also working with The Nature Conservancy to promote hop production in the Verde Valley, and help farms, like Bell Farms, grow crops on their fields and utilize irrigation methods that will help save water. Goetting is looking to work with Verde Valley farms to grow crops for VBC beer and at the same time, wants to help farms switch to a more environmental friendly approach to irrigating water from the Verde River. So the increase of agricultural does not have an impact on the river level.

The Pecan Nut Brown Ale will be using pecans from Windmill Farms, located here in Camp Verde. Both the Pecan Nut Brown Ale and the Gold Buckle Ale will be available at The Horn when finished. There will also be an upcoming tapping party at Boler’s to try the beers first, with exclusive invitation only to the contributors who met that award on the Kickstarter Campaigns.

Goetting plans to reach out to more local farms in the upcoming months, but for now, he’s making sure the Kickstarter awards are picked up and received by everyone who has generously helped The Verde Brewing Company in these last few months.

The brewery bricks are being painted, with supporters from the first Kickstarter already done, and VBC beer glasses and Horn growlers can be picked up at The Horn. The VBC team would like to reach out to everyone who has helped build the Verde Brewing Company brick by brick, and say thanks. The wall of support at the VBC location just shows how easy it is for a community to come together and create something brilliant.