Today’s Photo from Ted Grussing Photography: There She Goes Again

… it gets a little embarrassing at times, but I sorted through some photos I shot of aircraft taking off from the airport in Sedona and, well, what can I say? Sorry CJ LLC for the inconvenience, but my feline deity has just taken your Cessna Citation 550 for a joy ride. I know One is okay because she is with me, but the aircraft has been de-registered so maybe the landing didn’t go so well … haven’t checked the number of lives that One has left, but she may have used another one on this flight.

The image below is a re-work of a photo I took in 2019 during a snow storm at the airport. It is now in 2 x 1 aspect ratio and I’m printing a 48 x 24 for a friend and for my permanent frame in the dining room … I interchange multiple photos through the frame and it makes the whole process more reasonable … you pay for the frame to be built once and then just cycle different prints through it. 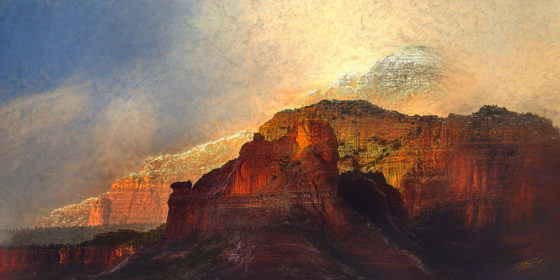 We want to wish you a very Happy Thanksgiving. Enjoy the day and the company of friends and family … we have so much to be thankful for.

Though changed as are my songs from youth,
A voice within my heart still sings,
“Live thou in tenderness and truth,
And love mankind instead of things.”
And often in the crowded mart,
With wrangling, selfish slaves of men,
These words like some old song will start,
And bring me to myself again.
Often In The Crowded Mart, by Max Ehrmann