Today’s Photo from Ted Grussing Photography: The go around…

Every once in a while you will see an aircraft come in for a landing and kind of screw it up and apply power and head back up and try it again … we call it a go around … more so at Sedona than many other airports … gliders of course by definition do not do go arounds :+) I also have several photos of planes that should have done go arounds. In flying it seems that power pilots do practice landings by doing touch and goes … this is where they fly the pattern and execute a landing and then take off again once they touch and do it all over again. Probably not a bad idea, but my training was always to get it as good as you can on the first landing because that is all you get. I still prefer to land engine off as that goes with my training and experience; if conditions are a wee bit on the nasty side though I do use the engine in case I need it. Never give up an option. 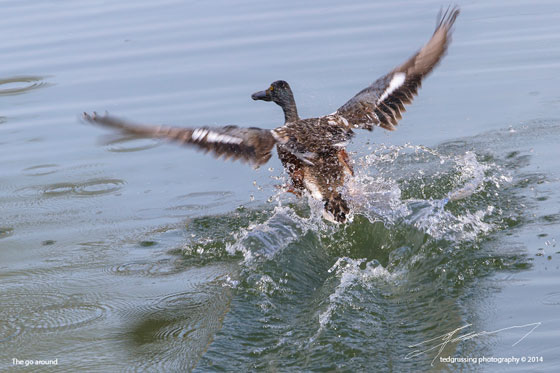 So, this afternoon I went down to the ponds after a lunch with friends and a few errands … never saw it before, but a drake Northern Shoveler made a great landing and then took off again before he was totally settled in the water. His head, wings and body are nearly obscured by flying water as he goes airborne again and check out the wake he left behind as he began his landing and his gear (webbed feet) are retracting from the landing position . Kinda cool … one friend says I should say rad as cool is out … don’t worry about stuff like that and cool works for me… cool is rad!

Gus sent me ten photos of the ongoing job refinishing the Lambada and if you would care to take a look the link is: https://www.dropbox.com/sh/wox3r3pmn1ofxr5/0Gjhd7FvPt  The paint on the leading edges of the wings and other stuff is a deep metallic blue and anything not blue will next be made to be white and no seal/seam. Stay tuned and I will add more photos as Gus sends them to me.

More good news; Reagan Word’s sculpture was the winner in the competition to grace the round a bout at the bridge … way to go Reagan and thanks to everyone on this list who cheered him on and voted for his vision.

While yet we talk and linger late at parting,
And this say o’er each day as my last words,
Success will come by love and trust and work.
— Max Ehrmann