Love watching this hen mallard shaking it and sending sprays of water high into the air and all around her … kind of a happy thing to witness. Supposed to cool down this week and hoping that the migration will get into full swing. Have some Widgeons that have arrived, a few Green Wing Teal and a few new Mallards. Think the Osprey I shot may have just been passing through … we’ll see. Nice to be heading down to the ponds again. 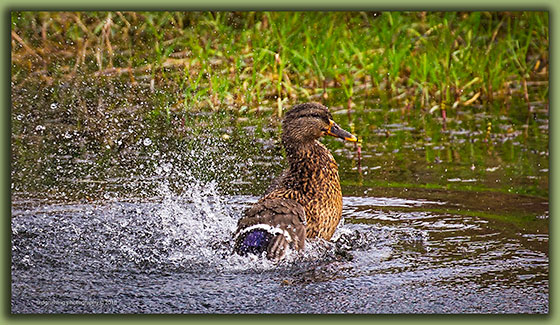 I’ve had numerous inquiries lately about my knees … well it has been nine months since I had the stem cell injections and I think they are doing pretty well. They do not hurt, I stand directly from a sitting position without a boost from my hands, I walk normally and over rough terrain and again no pain. Once in a while there is a little discomfort and I wonder if the effects are going to fade, but the discomfort itself fades and I return to my new normal which is good. Before the stem cell treatment I had a lot of pain and discomfort, had abandoned my long walks and took six to eight Advil a day; I take perhaps four Advil a month now. I did switch from a treadmill to a Concept2 Rower and love the full body workout I get on that … with the resistance set to 10 (1-10) I am averaging 180 to 187 meters per minute over a twenty minute workout and hope to get it over 200 meters per minute soon … if you do rowing, you know what a challenge these numbers are.

A good day today, finished a couple of new opals this morning and enjoying cutting on a regular basis again; mostly cleaning up projects I started and abandoned. Have a few new ones in mind including a resumption of faceting … think I’ll take a few photos of newly completed stones tomorrow; it’s going to be windy and rainy so a good day to be inside anyhow. My friend Murray has been asking to see some of my cutting, so that’s what it will be; perhaps One will be wearing a beautiful gemstone?

There has been some smoke in the Village today and likely a lot in the morning … this is from a wildfire that the USFS is actively trying to suppress … it is not a prescribed burn nor a managed fire … it is one that started naturally, and because of the heavy fuel load it is putting a lot of smoke into the air. They are trying to extinguish the fire, they are not managing (spreading) it. Thanks!!!

Nice trip down to Scottsdale and a stop at Anthem for a bite to eat … time to wrap the day and if anyone would like to join a few of us at the Hilton for dinner tomorrow night around 6P c’mon over.

Smile … you are breathing … enjoy the moment.