… two rafts on the Colorado River have beached and are on the beach before they continue the journey down river … it is also an area that appears to be safe from commercial intrusion for the foreseeable future as through the efforts of many groups including the Grand Canyon Trust the Escalade Project which intended to build a tramway down to the river here has been stopped. This is the Confluence of the Little Colorado River (turquoise water) and the Colorado River (kinda green) … the entrance to the Grand Canyon and the end of Marble Canyon. 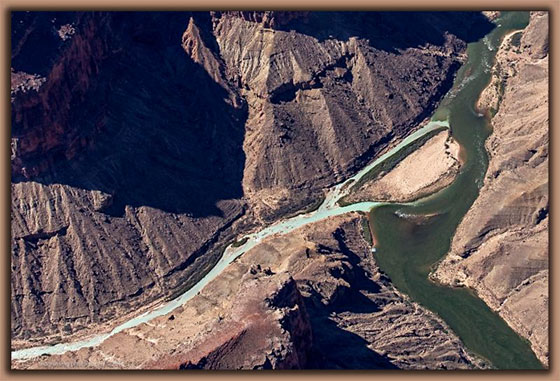 The canyon depth here is something in excess of 4,000′ and I took the shot from something like 4,000′ above the canyon rim … roughly a mile and a half above the water. I used my Canon 5D MK IV with a 24-70 lens set at 24mm … some amazing detail … this is a crop of 1800 x 1200 pixels from the original image which is 6720 x 4420 pixels and represents about 1/4th of the original frame, which means I could still go in closer and have good detail without significant loss of sharpness. It also gives you a look at why using a telephoto lens is so tricky. The 24 mm lens setting gives me a field of view of approximately 12,000′ x 8000′ and I used about a fourth of that. With the 400mm lens that I used in the email “The experiment” my field of view would have been only 720′ x 480′ which is smaller than the island in the photo. Probably 100mm would be ideal at 2880′ x 1920′ … fun stuff, but this gives you a little insight into the decision making process of what gear I choose to bring along in the plane … helps to know what I am going to be shooting too which is why I frequently bring three cameras with me for different types of shooting. Can’t pull over to the side of a cloud and change things around.

Great day here and hope yours was too … part of the “great” was tossing my laser ruby I was faceting and it is now residing in the trash can waiting for Taylor Waste to pick it up in the morning. Centuries from now someone may find it and wonder what caused someone to toss such a beautiful stone … and maybe appreciate the frustration that went into screwing it up. Next up an expensive stone … easier to focus on what I am doing :+) Truly enjoying it!

Smile and keep breathing … two of my favorite things in life.