… an abbreviation for a name that Geologists have given a very interesting and nearly perfect volcanic cinder cone and the flow from it. S-P Crater is located about 25 to 30 miles North of Flagstaff and is a very black cinder cone and flow. The actual name that was given the crater would probably be censored from the maps and if not would probably have generated numerous complaints from the PC Police as offending someone or something. Not sure why that would be the case as I see people walking their dogs and picking up such things with plastic bags after the dog performs a very natural act of waste elimination (how is that for a euphemism?) Anyhow, it is a very neat crater as are all of them up there. The lava flow is only a hundred feet or so deep, but it spills beautifully across the high desert floor. 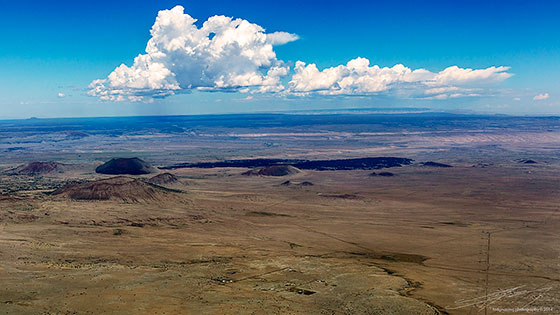 The erosion lines flowing out from the craters provide nice lines and give an artistic look to the surface. On the right just above center is a portion of the East Kaibab monocline which is one of the prominent features on the Colorado Plateau and above that on the horizon is the North Rim of the Grand Canyon and the surface is about as green as it ever gets up there as the precipitation is always the heaviest on the up slopes before the Peaks. It was a beautiful morning to be in the sky … a beautiful day to be breathing and to share your joy with all who you meet … how cool is it that we breathe, we live and we can say nice things about others … and after accumulating money from our own work help others too.

It is Wednesday … the Hilton Shadow Rock grill at 6:30PM. Anthony will be there and hopefully we’ll get at least ten or so to come join us. A fun time!

Enjoy the day … share a smile … especially with those who prefer to use hand gestures as a way to communicate their feelings :+)