I will be flying Mariah home from Wickenburg and this is pretty much the view I will have before landing back at Sedona. The winds are predicted to be up in the morning and calming down in the afternoon and switching to a NE direction so R3 will likely be the preferred runway and this is the view looking down R3. It is also a preferred runway with tailwinds up to about 10 kts as the N end of the runway is about 100’ higher in elevation than the S end, so you are landing uphill and the runway comes up and greets you as you travel down it. My patterns are not nearly as expansive as most power pilots fly and my downwind is just over the west side of the mesa and I turn final on the south end of the ridge that comes out and turns east at the end of the runway. 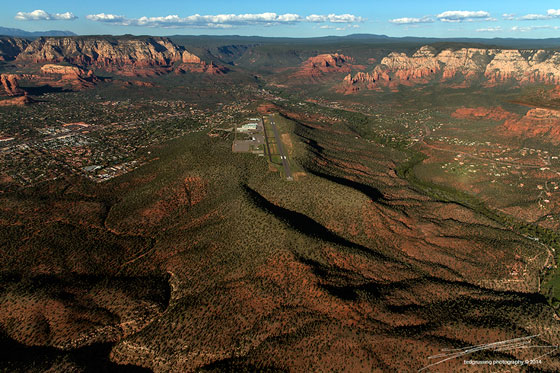 Still working at consistently landing as a glider and rolling off the runway and up to my shade area at the N end without turning the engine on … I get it about 25% of the time, but it is tough to judge right. West Sedona and Uptown are on the left side of the airport looking at the photo and the chapel area on the right. Looking straight up the runway you will see Munds Canyon and Oak Creek Canyon turns to the left just behind Wilson Mountain just above and left of the airport. Oak Creek runs along the airport on the right and is within the green belt of trees.. On the horizon on the left, a portion of the San Francisco Peaks and Mt. Elden and to the right of the airport  also on the horizon Mormon Mountain.

So some photos of the new look of Mariah will go out Tuesday … have to thank my friend Gordon in Idaho for coming up with the name … as Copilot and also as a name for the aircraft … just seems to fit. Heath from Performance One Aviation will be doing the assembly on Monday and would love to bring it home same day, but the winds are predicted to hit over 30 kts up here in the afternoon. Many thanks to Gus Haussler at Master Aircraft Services for the fabulous job on her and keeping me in the loop for the past seven weeks. Anyone thinking of having their ship repainted should strongly consider having Gus do the work. Reasonable by glider and aircraft standards and first rate work.

I have had a number of people accidentally unsubscribe from this list; I have no way of putting you back on so if you do the deed, let me know and I’ll get you on a temporary list of my own. There is a way to add a subscribe link on my website and as I rework the sites I will build it into it. Making a lot of changes and think they will improve your experience on the websites. Still getting close to 15,000 hits per month and hope to boost it again. Http://tedgrussing.com and http://tedandcorky.com

Think a celebratory dinner will be in order Tuesday evening …

Have an incredible day today … there will never be one like it again … it is the only one you are certain of … mostly certain :+) Share your joy and smile

Give me a few friends who will love me for what I am;
and keep ever burning before my vagrant steps the kindly light of hope.
And though age and infirmity overtake me,  and I come not within
sight of the castle of my dreams, teach me still to be thankful for life;
and for time’s olden memories that are good and sweet; and may
the evenings twilight find me gentle still.
— Max Ehrmann