Today’s Photo from Ted Grussing Photography:
on the run

…  the outcome was unknown when I took this shot today, the Dodgers batter was laying tracks doing his best to make sure he got to first base before the throw, the first baseman for the Giants was beginning to stretch for the incoming ball. The pitcher for the Giants was heading towards first to provide backup if needed whilst looking for the incoming throw too … ditto the Giants catcher who was being followed by the Home Plate Umpire.  The Dodgers first base coach was looking a little more relaxed than the others and with good reason as it was a solid base hit and the runner got there before the throw to first. 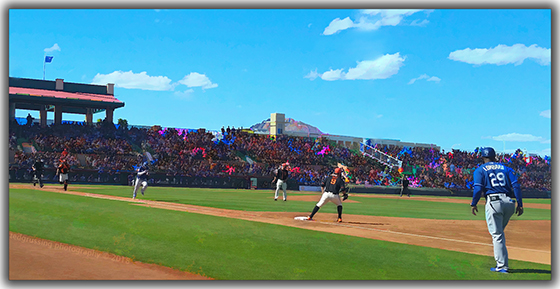 My daughter and her family treated me to a very cool weekend in Scottsdale, dinner at Houston’s, Saturday evening, a nice suite at the Hyatt Regency overlooking the lake, breakfast and the Giants/Dodger game this afternoon. What fun and it was especially fun to see the game played at Scottsdale Stadium in a relaxed spring training format. Of the professional sports, baseball has always been near the top if not at the top of sports I like. The intimate small stadium feel makes you feel like you are actually part of the game and the players were great in coming up and signing autographs for the kids. Helps to have front row seats just a few yards from first base too … and a weekend with Ted, Sus and Annika … doesn’t get better than that.

I didn’t know I could bring my pro level cameras into the game, so I left them at home and shot this and others with my Samsung S5. Next time it will be a 1DX with the 70-200 lens. Still, amazed at the quality of the shots from the S5. I have not spent a lot of time learning the settings and to be truthful I really have never seriously tried to learn the camera … think it may be worth doing in the future :+)

So, the kids are back in Half Moon Bay, I’m back in Sedona and another week is underway. Looking forward to Spring Training next year and may spend a few more days down there next year, buy first base front row seats in advance and bring some major camera firepower with me. A very long time ago I used to shoot sports and always enjoyed it … guess I still do … on the more intimate basis in smaller stadiums. Like when Minneapolis was triple A ball with the Minneapolis Millers, for basketball there were the Lakers … Minneapolis Lakers that is … Yikes!

Have a beautiful day and week … keep breathing and keep a smile on your face.