… it was a most beautiful day on Lake Pleasant today and the shooting was good. As we were leaving the Castle Creek area, I looked at the pocked and carved cliffs along the water line and a flock of Coots began emptying out of their new found digs. It was as though they thought that we were the building inspectors coming in to enforce some remote and ill understood municipal ordinance relating to occupancy codes and limits. Five of these guys stayed and I think the other ten or so came back after we passed by. It was really a neat sight and a very secure place as well. 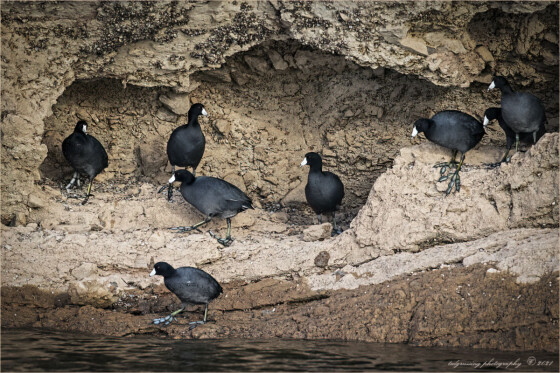 Home late and tired so will close the week out … wishing you all joy and happiness tomorrow and every day thereafter. Life is good, so keep smiling, it makes life a better place to be, and to be honest, it is easier to look at a person if they are smiling.

Though changed as are my songs from youth,
A voice within my heart still sings,
“Live though in tenderness and truth,
And love mankind instead of things.”
And often in the crowded mart,
With wrangling, selfish slaves of men,
These words like some old song will start,
And bring me to myself again.
— Max Ehrmann