… another terrific day completed and another new one soon underway. This is one of my favorite shots of the Sedona area which I took a few years ago. The sky had multiple layers of clouds and the light and shadow on the valley and the rocks were as amazing as the State song of Arizona, “I love you Arizona” … what a place to live. 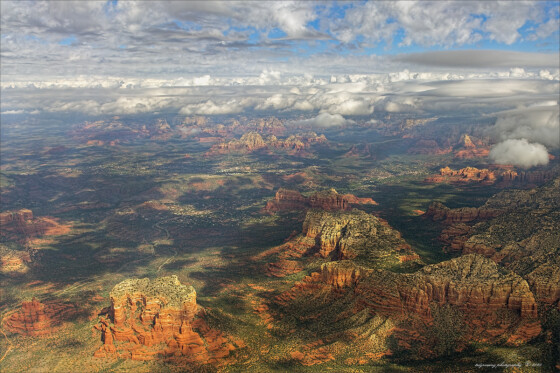 I was surprised to get an invitation to watch the private viewing earlier this week … turns out I was one of the photographers whose work they chose for the video … smiles!

Watch the video here and if you like it, please give it a thumbs up and share the link with your friends and family: I love you Arizona

Into the weekend for me, back Monday morning. Have absolutely beautiful days and share the joy you find in life with those you meet and greet. Life is beautiful!

Occasionally permit self-abandonment to the caprice of beauty; rush past the sentinel that keeps you in the prisoned city, and live for an hour in the house of the world, acquainting yourself with the still people of the air.
Learn the music of a summer night by the the restless wave of the sea, or surrender to the sunlight of an open country where the illimitable sky at last meets to kiss the sweet, green earth, and stay till the crimson shafts burn the western world;
And something will rise in you that is not connected with the tiring routine of your trade … something strange and calm.
— Max Ehrmann