… before heading down to Falcon this afternoon I headed up to Flagstaff and beyond to photograph the peaks and volcanic cones left behind by volcanic eruptions over millions of years and over the past several days recipients of snow … lots of it. I got some good video too and hope to work on it a little tomorrow. Also I got some very neat close up shots of the peaks, mostly from the east and north sides. There was about a 25 kt wind for 041 at the peaks and it was pretty neat as the moist wind came in through Lockett Meadows and as it rushed up the slopes in the caldera and the air cooled it boiled out through the gap between Humphreys Peak and Agassiz Peak … also between Agassiz and  Freemont Peaks … and the clouds continued downwind headed to the SW and creating interesting effects in the air … knowing what they were, had to sample them. 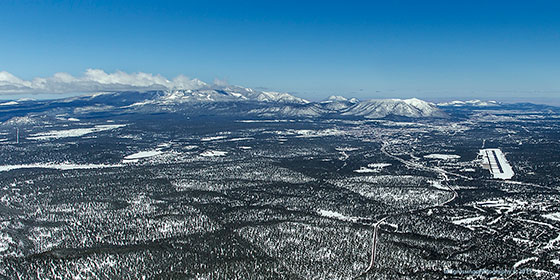 Another night I will put those shots out, but one of the first shots I took on the way up was this pano shot showing the greater Flagstaff area. On the right side of the image I-17 enters, passes just below Pulliam Field, the Flagstaff airport and it continues to the left and moving to the north and into Flagstaff itself. I-40 comes in from the left a little below center and connects with I-17 to the left of the airport and then it continues to the east. Just to the left of the airport a road drops down towards the base of the image … this is SR 89A which continues on down to the south and the beauty of Sedona. Looking from left to right there are a few volcanic cones beyond the San Francisco Peaks and then the peaks themselves and to the right of them Mt. Elden.  Above the cones on the left of the image you can just make out the North Rim of the Grand Canyon. And on the right a view of the pointed desert.  Even though you know that the Flagstaff area is pretty well  populated, it seems a little insignificant in the overall vastness of the area which is why I like this photo so much … it is a forever shot and with a 7,000’ long launching pad!

After an 45 minutes of shooting the area it was time to cut a trail to Falcon for work on the motorglider. Some pleasant conversation with friends and then rent a car from Hertz and the drive back to Sedona and a late arrival for dinner at the Hilton with friends and the music of Anthony. Don’t get the Lambada back until Saturday morning so perhaps some house painting will hit the top of the list :+)

Have fun … seriously, why would anyone choose not to?