Life along the creek where food and water is abundant and creatures come to feed and drink. The Great Blue Herons are among the most successful hunters and range up and down the waterways and ponds in search of prey. They are capable of standing motionless for extended periods of time in or near the water and when an unsuspecting fish swims near the heron he launches a swift and accurate attack with his head darting down with the swiftness of an arrow unleashed from the bow. So here is a beautiful creature traveling down river in search of another hunting spot. 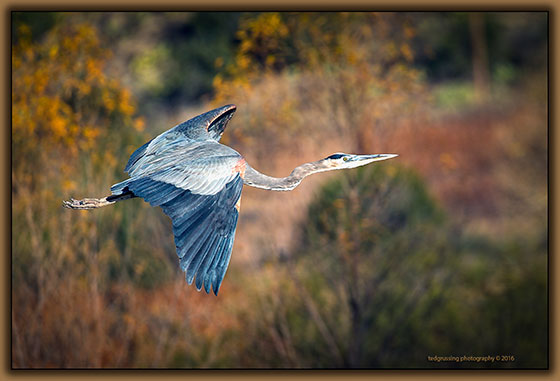 Got a flight in this afternoon but did not take a single picture; all of the Sedona area was in heavy shadow and no sun was getting through the low cloud layer. Looking up towards the peaks, cloud base appeared to be about 3500’ AGL and again, pretty solid. It was a nice flight and as I was finishing storing the plane the sun broke through some holes in the clouds and it was beautiful … like looking at a flight of ducks coming in after shooting hours … enjoy the sight and their wisdom.

Spoke with a friend today about pile burns and he shared some of the research they are doing. One of the methods which is gaining recognition is the use of a black plastic tarp placed over the pile and over a period of time the heat and protection from the rain creates a dry area in the center of the pile so that when they torch the pile it is a high intensity fire and creates almost no smoke and makes for a much shorter burn. The photos comparing two piles, one traditional and the other where it is covered prior to ignition is like night and day. Something that it would be good to see in the forests around here. Also there are devices called Air Curtain Burners where they place the logs, slash or whatever into it and ignite it. There are large fans which generate very high intensity burns producing almost no smoke. A link to these devices explaining the methods is at; http://www.airburners.com/principle.html . Sure would be nice to have the USFS use these relatively clean methods of disposing of slash.  Depending on the size these units can burn up to 10 tons per hour. They have tested the use of the black plastic sheeting and burning them produces like zero extra pollution … cheap as can be and clean! Also another friend sent me information on APS using slash, ground up and mixed with coal as biomass fuel for the generating plants. Can’t find the link for that.

Time to wrap the day … rain on tap so the great indoors will be a welcome place to be. Have a great day … smile!