of years of erosion and natural forces have created this beautiful landscape … greed often overwhelms the need to preserve world class treasures which bring us back through history and leave us in awe of the beauty that natural forces have created on planet earth. While there are those who oppose fossil fuels, they are the reason we have been able to build the great nation and economy that we have and some fuels like natural gas are actually very clean. Perhaps it is with an eye to take advantage of the anti-fossil fuel political climate that groups are coming up with so called green sources of energy like these four hydroelectric dams on the LC. 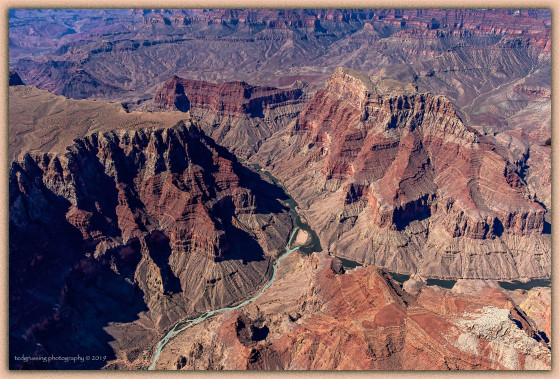 Hydroelectric power has downsides … Glen Canyon dam caused beautiful canyons to fill with water which of course created Lake Powell. This is a beautiful lake for human recreation but at what price? There is talk of removing Glen Canyon dam and restoring the natural flow of the Colorado river through the canyons as it was until the dam was completed in 1966 … authorized by a narrow congressional margin, work began with absolutely no environmental review. The four new proposed dams on or near the Little Colorado River would forever destroy the beauty you see in the photograph tonight. The turquoise waters of the Little Colorado River would be gone … who knows what changes would occur to the ecology of the Colorado river both here and downstream. All sorts of not good things have happened to the Colorado downstream of Glen Canyon dam and you can find hundreds of articles discussing this on the internet.

The Little Colorado river is a river that drains the White mountains and flows north through the painted desert. For the most part the river bed is dry, but during rainy periods or snow melt the river runs through the Painted Desert picking up vast quantities of dirt and sand and when it goes over Grand Falls some sixty or so miles from the Confluence it is a muddy waterfalls. Blue Springs is about 12 miles upriver from the confluence and you only get the color when the water flow upriver from the springs has been minimal for days to weeks. With a dam constantly discharging water upstream you will never see this color again.

The confluence of the Colorado and the Little Colorado also marks where Marble Canyon ends and the Grand Canyon begins. The point upper left center overlooking the canyon is Cape Solitude, where you can go and simply enjoy the quietude of such a wild and beautiful landscape, carved over millions of years.  The resort development at the Confluence has been stopped for now so let’s stop this new obscenity from destroying the beautiful place you are looking down on. The Colorado river runs from right to left in this photo and the North Rim is at the top of the photo.

Go to: https://www.grandcanyontrust.org/little-colorado-river-dam-proposals read about it and sign the petition … while you’re at it, why not join the Grand Canyon Trust which has done so much to preserve The GC and the Colorado Plateau from all sorts of bad ideas. There will always be a need for them as there are always those who seek profit without regard to the consequences for natural treasures. Such events can and do cause trophic cascades and not in a positive way like the introduction of wolves to Yellowstone Park.

Have a beautiful day and enjoy this wondrous planet we are inhabitants of … for now, earth is home.