Sedona AZ (April 9, 2018) – The Sedona International Film Festival is proud present a one-night only special premiere of the award-winning new documentary “One Mind: A Zen Pilgrimage” on Thursday, April 19 at 4 and 7 p.m. at the Mary D. Fisher Theatre.

“One Mind” is a rare cinematic portrait of life inside one of China’s most austere and revered Zen communities.

The monks at Zhenru Chan Monastery continue to uphold a strict monastic code established over 1400 years ago by the founding patriarchs of Zen in China. In harmony with the land that sustains them, the monks operate an organic farm, grow tea, and harvest bamboo to fuel their kitchen fires. 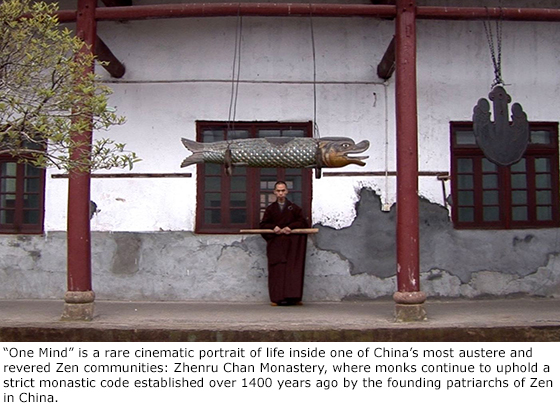 At the heart of this community, a group of cloistered meditators sit in silence for 8 hours every day. Suggesting a Zen version of the critically acclaimed film “Into Great Silence”, “One Mind” offers an intimate glimpse into a thriving Buddhist monastery in modern China.

Director Edward A. Burger has lived and studied with Buddhist communities throughout China for over 15 years, and is the first Western filmmaker to be granted such unprecedented access to the daily rituals and traditions practiced in this remote mountain monastery.

Burger became a regular visitor to Zhenru, sitting meditation in their meditation hall and learning the intricacies of monastic discipline. Inspired by the natural life of the community, and struck by the role that storytelling plays in what he calls the “alchemy of monastic life”, Burger decided to produce “One Mind”. He filmed over five years and four seasons to create a cinematic portrait of the natural ebb and flow of spiritual life within this community. Within the forested hills and fortress-like corridors of Zhenru Monastery, he turned his camera toward centuries-old traditions and practices largely unknown even to China’s citizens and never before captured on film.

“One Mind: A Zen Pilgrimage” will show at the Mary D. Fisher Theatre on Thursday, April 19 at 4 and 7 p.m. Tickets are $12, or $9 for Film Festival members. For tickets and more information, please call 928-282-1177. Both the theatre and film festival office are located at 2030 W. Hwy. 89A, in West Sedona. For more information, visit: www.SedonaFilmFestival.org.