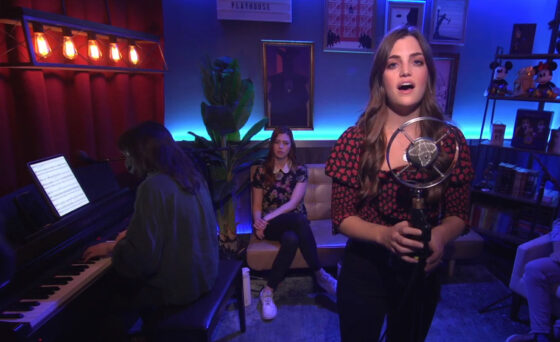 The team behind the new indie feature film “Him” brings you a one-night only musical cabaret show with drinks, music, laughs and 5 incredible musical theatre performers. Grab your friends, your mom, anyone with ears, and get ready to enjoy a night full of songs you’ll be humming for days after.

Laura Schein is an actor/writer/songwriter living in Los Angeles. She is the co-creator of the acclaimed new musical Emojiland (New York Times Critics Pick; Richard Rodgers Award Finalist; Drama Desk, Lucille Lortel, Outer Critics Circle, Off-Broadway Alliance Nominee), and was in the original cast of the Off-Broadway premiere at The Duke On 42nd St. She was on the music team for the animated feature UglyDolls, and co-wrote the Kelly Clarkson/Janelle Monae duet “Unbreakable,” which was shortlisted for the 2020 Academy Awards. As a lyricist, her work has been featured in the Netflix series Westside, and the Paramount+ feature Honor Society. Laura has guest starred on Showtime, ABC, CBS, Amazon and SyFy, and was a series regular on YouTube Originals’ comedy series Sing It! She has performed at theaters such as Center Theatre Group, Geffen, and The Goodman in Chicago. She’s also toured the country with Jason Alexander in his show An Evening With Jason Alexander.

Clayton Farris is an actor, writer and internet comedian who hangs his hat in the Silverlake neighborhood of Los Angeles. Clayton has been seen in over 25 national commercials for brands you all know and perhaps love. His social media impact has reached over 500k followers Worldwide across Vine, Instagram and TikTok and has amassed well over 50 million views. Currently in development on multiple projects with his writing partner Laura Schein and his frequent collaborator, comedian Chelcie Lynn. Recent TV Credits: Seal Team, Bosch: Legacy and 911.

Tess Higgins is a Los Angeles based actor and writer who got her start in Washington DC. Select musical theatre credits include Godspell, The Toxic Avenger, Wonderland, Beauty and the Beast, and Legally Blonde the Musical. She has appeared in numerous indie shorts and features, including 2021’s KRINGLE TIME. Tess is also an advanced pianist, and an experienced improviser. “Him,” is her first feature film, which she co-wrote with Rebecca Wahls and will be starring in – “Him” will shoot locally in Sedona this winter! Learn more about Tess at www.tesshiggins.com.

Margaret Berkowitz is a triple threat actress, singer, and dancer who attended NYU’s Tisch and The University of Oxford.  She has an extensive background in musical theatre, professionally acting since age eight, and has performed Off-Broadway at New World Stages and Joe’s Pub. Margaret recently wrapped principal photography as Chloe in the indie romantic comedy, THINGS LIKE THIS, and stars as Becca in the award-winning musical short, MARRIAGE MATERIAL (Fox Searchlight), currently in development as a feature film. She was honored to be in the cast of the Los Angeles premiere of the Ahrens and Flaherty musical, Dessa Rose (2018), as well as to have played Sharon Tate in the New Musicals Inc. staged reading of Manson’s Girls. Favorite credits include: 25th Annual Putnam County Spelling Bee, Once Upon A Mattress, Legally Blonde, Chess, Dog Sees God, and Spring Awakening.

Jonny Perl is thrilled to make his Mary Fisher Theatre debut. As Managing Director of Shinbone Theatre Company, Jonny has developed, produced, and directed new musicals (Shel, Lorelei: I’m Coming Out), cabarets (Macabaret, Crazy Ex-Girlfriend), and immersive content (What Went Wrong, Welcome Back Woodchucks, Afterlife Anonymous). As an actor, he was most recently seen in Los Angeles productions of One Flew Over The Cuckoo’s Nest,Tick, Tick…BOOM!, and Thoroughly Modern Millie. As an associate producer for Cinemation/Little Stone Productions, he develops and produces new Broadway musicals and animated films. Most recently, Paws of Fury for Paramount Pictures and Nickelodeon. He is best known for his interactive musical theatre content on TikTok @Jonny.Perl. He is a graduate of UCLA.

“Him” is a female led independent film about the dark underbelly of the reality television world told from the contestant perspective. The film will shoot right here in Sedona, this January! “Him” is written by Tess Higgins and Rebecca Wahls, and will be directed by Rebecca Wahls.

For more information on “Him”, please visit the film’s website at www.himthefilm.com.

“A Musical Cabaret Evening” will take the stage at the Mary D. Fisher Theatre on Sunday, Oct. 16 at 7 p.m. Tickets are $25 in advance; $30 at the door. For tickets and more information, please call 928-282-1177. Both the theatre and film festival office are located at 2030 W. Hwy. 89A, in West Sedona. For more information, visit: www.SedonaFilmFestival.org.