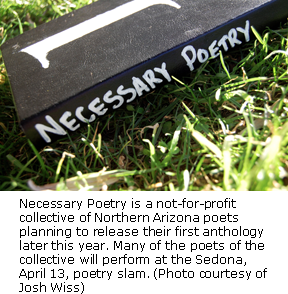 Slammers will need three original poems, each lasting no longer than three minutes. No props, costumes nor musical accompaniment are permitted.

What is Necessary Poetry

The April 13 poetry slam will feature many of the 15 poets involved in the Necessary Poetry project, a collective of 15 of the best performance poets in Northern Arizona. Necessary Poetry is currently raising money to publish its first anthology of poetry, which will include a printed book and an online version complete with high-quality video, audio versions of poetry put to music and visual arts by some of Northern Arizona best contemporary artists to enhance the poetry.

The Necessary Poetry collective will use its funds to host workshops for students, youth and seniors around Northern Arizona. For more information on the project and goals, visit NecessaryPoetry.com, NecessaryPublishing.com or the group’s “Holy Spoken Word – Necessary Poetry’s 1st Anthology” project on Kickstarter.com.

All types of poetry are welcome on the stage, from street-wise hip-hop and narrative performance poems, to political rants and introspective confessionals. Any poem is a “slam” poem if performed in a competition. All poets get three minutes per round to entertain their audience with their creativity.

For poetry slam standings, videos from past slams, and updates, visit foxthepoet.org. For poetry events in Northern Arizona, visit NecessaryPoetry.Com.

Tickets are $10 in advance and $12 the day of the event, available online at studiolivesedona.com.