Sedona AZ (March 4, 2013) – Near-death experiencer and New York Times bestselling author Anita Moorjani will be speaking in Sedona, Arizona on Saturday, March 23, 2013, at the Sedona Creative Life Center. Tickets are $15.00 per person and are available online and at the door. Doors open at 6:30 PM, Anita’s presentation begins at 7:00 PM. There will be time for questions and answers after Anita’s talk. Copies of Anita’s book, “Dying To Be Me,” will be available for purchase. Anita will be signing copies after her presentation. 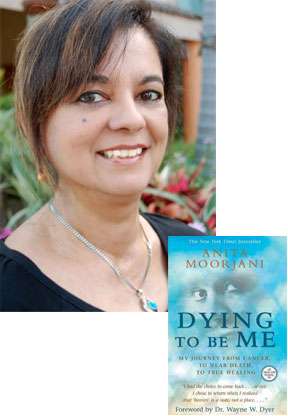 Anita Moorjani was born in Singapore of Indian parents. At the age of two, Anita moved to Hong Kong where she grew up speaking English, Cantonese and Sindhi, an Indian dialect. In April of 2002, Anita was diagnosed with cancer (Hodgkin’s Lymphoma). After four years of struggling with cancer, Anita’s body, riddled with tumors the size of lemons, began to fail. In February of 2006, she slipped into a coma. Doctors gave her hours to live. As her body lay dying, Anita entered another dimension. In this otherworldly place, Anita experienced profound peace and love. She also learned many things about life, and the laws of life, including how she had caused her own cancer. Then she was given a choice: stay on the other side, or return to Earth. After being reassured that her body would heal itself if she returned, Anita chose to return and share with others what she learned. To the amazement of her doctors, Anita woke up from her coma and within weeks her body was fully healed. Anita’s life is now filled with the depths and insights she gained while in the other realm.

World renowned author Dr. Wayne Dyer discovered Anita’s story and encouraged her to write a book. Anita’s book, “Dying to be Me,” hit the New York Times Bestsellers List only two weeks after its release in March, 2012. Because of the power of her story, Anita regularly addresses sell-out crowds all over the world.

Anita’s appearance in Sedona is made possible by NewHeavenNewEarth (NHNE) and The Mustard Seed Venture. Based in Sedona, these two non-profit organizations have been hosting a series of classes that explore how the universal truths contained in near-death experiences can be used to transform our lives.

Anita Moorjani book Dying To Be Me