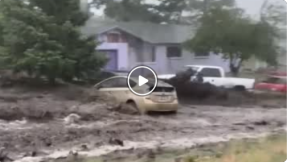 Flagstaff/Sedona AZ (July 15, 2021) Monsoon rains Wednesday wreaked havoc in Flagstaff and some parts of Sedona yesterday, causing flash flooding in certain areas.  While some streets were flooded in Sedona, the rain hit Flagstaff hard, causing flash flooding in some neighborhoods. A woman in Flagstaff filmed a flash flood carrying away a car in fromt of her house during the deluge. In the video the woman filming the flood could be heard screaming “Oh my God” as a white car is swept down the block.

No injuries were reported, luckily. and more rain is expected today.

Recent fires in Flagstaff forests have exacerbated the possibility for flash flooding in and around the city.

During phone generated alarms in Sedona residents were told not to step outside or drive due to the rain, lightning and possibility for flash floods.

The woman said it only took a few seconds for the flooded street in front of her home to turn into a raging river.

Here is a video of the event posted on AZfamily.com