Sedona AZ (March 8, 2016) – Sedona International Film Festival is proud to be the official host of the new “Art & Architecture in Cinema” series, joining hundreds of theatres around the globe for this special exhibition on screen. The program will feature seven different titles and bring the world’s greatest works of art, and their environs, to the big screen. Cinema guests can now enjoy unprecedented high definition access into the lives of renowned artists, their art and the fabulous museums and galleries that are not only the custodians of such masterpieces, but works of art in their own right.

The first in the series — “Florence and the Uffizi Gallery” will show in Sedona on Monday, March 21 at 4 and 7 p.m. at the festival’s Mary D. Fisher Theatre. 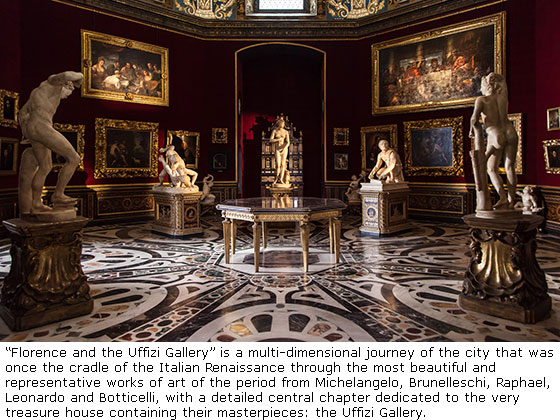 A Journey into the heart of the Renaissance. “Florence and the Uffizi Gallery” is a multi-dimensional journey of the city that was once the cradle of the Italian Renaissance through the most beautiful and representative works of art of the period from Michelangelo, Brunelleschi, Raphael, Leonardo and Botticelli, with a detailed central chapter dedicated to the very treasure house containing their masterpieces: the Uffizi Gallery, including the breathtaking “Adoration of the Magi” by Leonardo Da Vinci, which will be brought back to life in 2016, after several years of restoration, and here unveiled in worldwide exclusive premiere on the big screen. Moreover, a fascinating, Gothic-flavored interlude will display much darker, more monstrous and frightening paintings, such as those by Caravaggio.

Art plays the leading role in the film, thanks to the moving narration provided by the mastermind of the Italian Renaissance, Lorenzo the Magnificent, played by Simon Merrells (Spartacus) and authoritative contributions from the main international expert in Renaissance art Arturo Galansino (curator of the Royal Academy in London and newly appointed director of the Strozzi Foundation in Florence) who signed the academic, artistic and scientific supervision of the script, and Antonio Natali, director of the Uffizi, who will welcome us in inside the Gallery and will detail the key works.

This curated collection of acclaimed films will give audiences around the U.S. an intimate and informed experience with some of the world’s leading artists and masterpieces. This series will bring the great artistic treasures of the world to audiences who may not have direct access. With the highest quality productions and unrivaled expert narration, this is as close to a museum experience as any culture lover could hope for.

“Florence and the Uffizi Gallery” will be shown at the Mary D. Fisher Theatre on Monday, March 21 at 4 and 7 p.m. Tickets are $15, or $12.50 for Film Festival members. Tickets are available in advance at the Sedona International Film Festival office or by calling 928-282-1177 or online at www.SedonaFilmFestival.org. Both the theatre and film festival office are located at 2030 W. Hwy. 89A, in West Sedona.