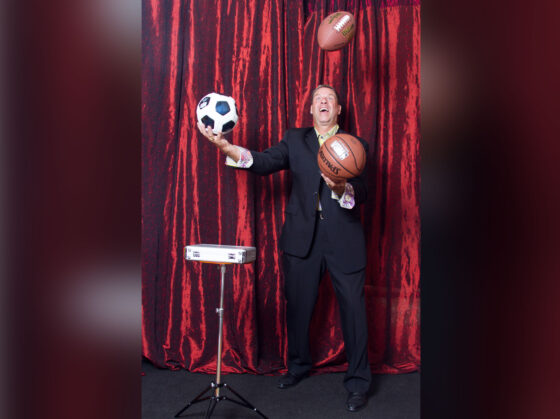 James Hunsinger started his magical career in Philadelphia with a Christmas present from his mother at the age of ten. Forty years later, he is still amazing audiences with his intimate performances, on-stage antics, and quick-witted humor.
Share
Facebook Twitter LinkedIn Pinterest Email Reddit WhatsApp

Sedona News – Are you ready to be drawn into a vortex of magic? Watch objects and creatures vanish into thin air. Behold the conjuring of a tiger live on stage. Be amazed by one man’s ability to read your mind.

Master of magic and high-end hilarity, James “Jimbo” Hunsinger presents, “An Evening of Magic” live on stage at the Mary D. Fisher Theatre on Saturday, Aug. 20 at 7 p.m.

With captivating magic like you’ve never seen before, you’ll be on the edge of your seat and laughing your socks off. An interactive, mesmerizing showcase of shenanigans, this is one wild Sedona ride you won’t want to miss.

Experience the wonder of vortexes, illusions and humor with the best magical entertainer in Sedona.

James Hunsinger started his magical career in Philadelphia with a Christmas present from his mother at the age of ten. Forty years later, he is still amazing audiences with his intimate performances, on-stage antics, and quick-witted humor.

Graduating Ringling Brothers Clown College and touring with the circus led him to a six-year enlistment with the US Navy where he performed for the USO entertaining the troops. Since then, he’s performed in fourteen countries and has made appearances at Magic Castle in LA as well as appearing at various locations in Las Vegas.

James now lives in mystical Sedona, Arizona where he entertains at many local venues and restaurants spreading his special brand of laughter, joy and amazement to locals and tourists alike.

“An Evening of Magic” will take the stage at the Mary D. Fisher Theatre on Saturday, Aug. 20 at 7 p.m. Tickets are $20 in advance and $25 at the door, and all include a meet-and-greet with Jimbo in the lobby after the show.