Sedona AZ (September 2, 2017) – The Sedona International Film Festival is the official, exclusive Northern Arizona home for the New York Film Critics monthly series debuting new films weeks prior to their theatrical release. The series is hosted by Rolling Stone Magazine’s Peter Travers, via satellite, and features a Q&A with the filmmaker and stars from the film each month.

The September premiere event will feature the debut of “Year By The Sea” — based on the New York Times Bestseller — for one show, one night only on Tuesday, Sept. 12 at 7 p.m. Peter Travers will host and introduce the film; and the Q&A following the film will feature Karen Allen, one of the stars of the film, plus other cast members and filmmakers.

It’s never too late to reclaim your life. 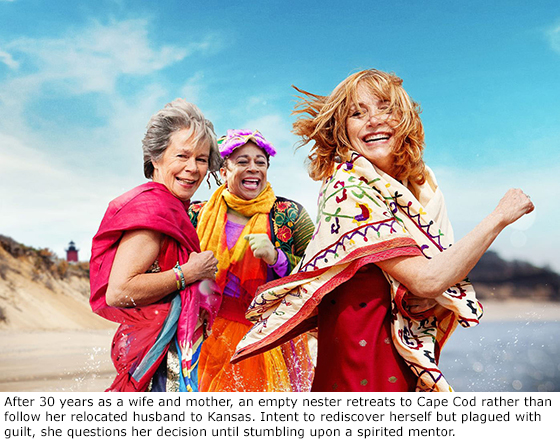 After 30 years as a wife and mother, an empty nester retreats to Cape Cod rather than follow her relocated husband to Kansas. Intent to rediscover herself but plagued with guilt, she questions her decision until stumbling upon a spirited mentor. Supported by her literary agent and a host of locals, including a sexy fisherman, our heroine learns to embrace the ebb and flow of life — ultimately discovering the balance between self and sacrifice, obligation and desire.

Join us for a special evening and sneak premiere of this new drama, hosted by Peter Travers from Rolling Stone Magazine via satellite, and stay for the Q&A with Karen Allen and other cast members and the filmmakers.

The New York Film Critics Series premiere of “Year By The Sea” will take place at the Mary D. Fisher Theatre one day only: Tuesday, Sept. 12 at 7 p.m. All tickets are $12 for this exclusive premiere event. For tickets and more information, please call 928-282-1177. Both the theatre and film festival office are located at 2030 W. Hwy. 89A, in West Sedona. For more information, visit: www.SedonaFilmFestival.org.