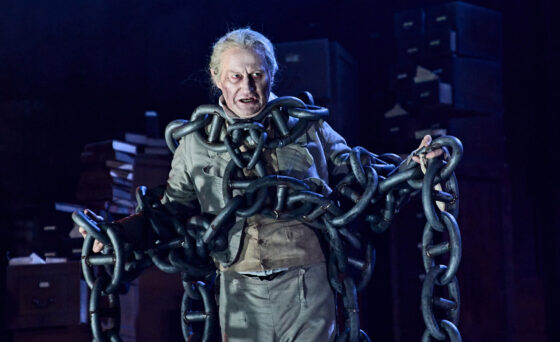 Mark Gatiss stars as Jacob Marley in his own irresistibly theatrical retelling of Dickens’ classic winter ghost story, “A Christmas Carol”, alongside Nicholas Farrell as Scrooge. Prepare to be frightened and delighted in equal measure as you enter the supernatural Victorian world of “A Christmas Carol: A Ghost Story” on the big screen.
Share
Facebook Twitter LinkedIn Pinterest Email Reddit WhatsApp

Sedona News – The Sedona International Film Festival is proud to join cinemas around the globe for a worldwide theatrical event “A Christmas Carol: A Ghost Story” showing Thursday and Sunday, Dec. 1 and 4 at the Mary D. Fisher Theatre.

Mark Gatiss stars as Jacob Marley in his own irresistibly theatrical retelling of Dickens’ classic winter ghost story, “A Christmas Carol”, alongside Nicholas Farrell as Scrooge.

This powerful tale of life, love, loss and redemption is as relevant today as when it was first published 179 years ago. A Nottingham Playhouse production, it was filmed live for cinemas during the 2021 stage run at London’s sumptuous Alexandra Palace Theatre and filled with Dickensian, spine-tingling special effects.

Prepare to be frightened and delighted in equal measure as you enter the supernatural Victorian world of “A Christmas Carol: A Ghost Story” on the big screen.

It’s a cold Christmas Eve and mean-spirited miser Ebenezer Scrooge (Nicholas Farrell) has an unexpected visit from the spirit of his former business partner Jacob Marley (Mark Gatiss). Bound in chains as punishment for a lifetime of greed, the unearthly figure explains it isn’t too late for Scrooge to change his miserly ways in order to escape the same fate, but first he’ll have to face three more eerie encounters.

Tickets are $15 general admission, or $13 for Film Festival members. For tickets and more information, please call 928-282-1177. Both the theatre and film festival office are located at 2030 W. Hwy. 89A, in West Sedona. For more information, visit: www.SedonaFilmFestival.org.