Don Whitcher & The Kings of The Border at Studio Live

This band of seasoned musicians is dedicated to the legacy and legends of Americana and Roots music, performing a mix of original and cover songs. Based in the Verde Valley of Northern Arizona, the band is fronted by Don Whitcher on lap steel guitar and backed by Joe Neri on guitar, Gregg Gould on bass and Wing Ryan on drums. 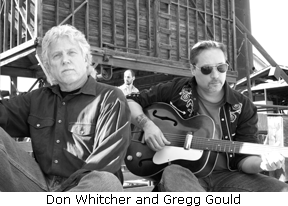 Don Whitcher is a prolific singer-songwriter and one of the best slide players in the Southwest. He was signed to 95 North Records in 2004 with his previous band, Slant 6 Cowboys, who charted in the Americana and Roots Country charts.

Gregg Gould is the rock-solid bass player that every band needs, who also plays guitar on some of the band’s songs. He is a multi-instrumentalist (guitar, bass, harmonica, percussion) equally at home playing everything from spiritual hymns to rock â€˜n’ roll to country blues.

Wing Ryan is one of the most versatile drummers in Northern Arizona, whose experience with and mastery of many different musical styles and genres adds depth and taste to his performances. He is also a member of Amitabha, a world music band based in Sedona.

Don Whitcher & The Kings of The Border studio live