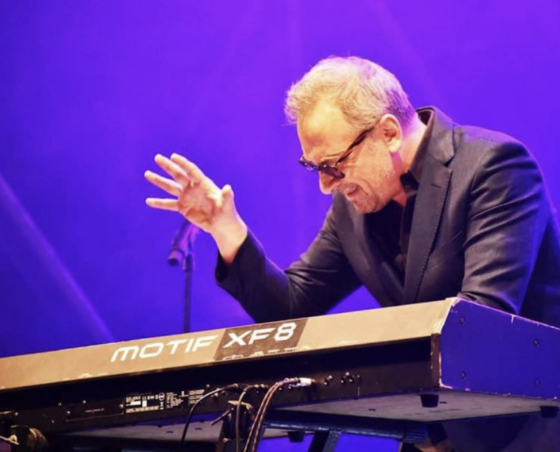 His name is Brian Simpson and in the jazz world he is considered one of its most talented and creative luminaries.

An inspired keyboardist, composer, prolific studio musician and producer Simpson is a master of all he purveys.

His eloquent approach to playing, sophisticated harmonics sense, bluesy overtones, R&B flavor and keen sense of how to craft a song that stands the test of time have made him the go-to man for many.

Through the years he has been revered for his unparalleled ability to compose unforgettable melodies and irresistible grooves.

Simpson’s soulful approach to music has made him first call for many including Janet Jackson, Teena Marie, George Duke, Stanley Clarke and Dave Koz.

A chart-topping musical chameleon who wrote the #1 R&B hit “The First Time” for Surface in the 1990s, Brian Simpson has a knack for churning out timeless anthems.

“Our house was filled with music,” he said of his musical roots. “I never really considered any other lifestyle.”

Simpson’s breakthrough as a solo artist began in 2005 with the #1 radio hit It’s All Good. The title track of It’s All Good proved instantly and joyfully prophetic, as it hit #1 on the Radio & Records Smooth Jazz Airplay chart and remained in the Top 5 for four months.

After graduating from Northern Illinois University, Simpson relocated to Los Angeles where he quickly immersed himself in the local jazz scene. Late night jazz sessions found him playing alongside everyone from saxophonists Everette Harp and Boney James to guitarist Norman Brown.

The free-spirited musician soon found himself taking a temporary leave of absence from the jazz scene, touring the world with pop divas Teena Marie, Sheena Easton and Janet Jackson.

His foray into the pop world didn’t end there; in January 1991, he co-wrote the #1 Pop hit “The First Time” by Surface, which conquered both the R&B and Adult Contemporary charts.

Placing his success in pop aside, Brian Simpson has always been a working jazz musician. He has toured with some of the greats of recent jazz history, including George Duke, Stanley Clarke, Larry Carlton, Billy Cobham, and Gerald Albright.

Brian had been the musical director for jazz saxophonist Dave Koz for close to 20 years, and for a decade the Musical Director of the ambitious and highly popular “The Smooth Jazz Cruise.”

When it comes to jazz Simpson is the real deal. He is one of the most thrilling and innovative pioneers on the contemporary jazz scene, so you aficionados out there need to make it a point not to miss this musical icon close-up and live at Sound Bites Grill this weekend.

Doors open at 5:30 p.m. A full regular menu is available to order from in addition to cocktails.

Sound Bites Grill is located at the Shops at Piñon Point adjacent to the Hyatt in Sedona. For more information please visit SoundBitesGrill.com or call 928-282-2713. Tickets can be purchased via Website.