VVFD Responds to Two Vehicle Accident
on Highway 89A

Cottonwood AZ (August 19, 2017) – On August 18th at approximately 12:15pm the Verde Valley Fire District (VVFD) responded to a 2 vehicle accident on 89A and mile post 361.  Upon arrival crews found 1 vehicle with minor front end damage and no injuries.

The 2nd vehicle was found in the median after it rolled over multiple times and sustained heavy damage.  The driver was seat belted in the vehicle during the accident; however she was ambulatory upon the crews arrival.  Neither driver was transported by VVFD. 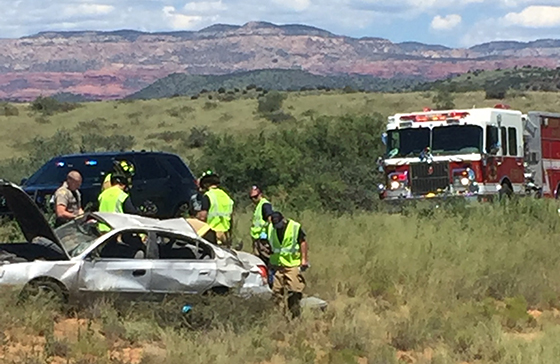 The fast lanes on both northbound and southbound were blocked for approximate 20 mins.  Arizona State Troopers were also on scene assisting VVFD.

VVFD would like remind everyone how important it is to buckle up.  The outcome of this accident could have much worse if seatbelts were not utilized.  If it’s predictable it is preventable.