Venom begins to flow as the weather warms

Snakes and more ready to emergePhoenix AZ (April 4, 2014) – Residents of the desert should always remember one simple rule when the weather begins to warm: know where you are placing your hands and feet.“That one rule can help people avoid the majority of potentially dangerous encounters,” said Tom Jones, amphibians and reptiles program manager for the Arizona Game and Fish Department. “People shouldn’t fear snakes and other reptiles, and only need to use caution and common sense to coexist with them.” 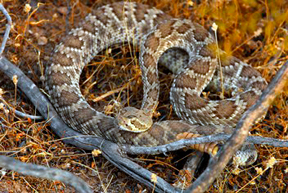 Critters such as snakes, scorpions, spiders, and lizards are going to become increasingly active as the weather warms. During the hottest days of summer, most rattlesnakes will be more active during the evening and seek shelter during the day.While there are many snake species within Arizona, rattlesnakes are synonymous with the state. Although new species of rattlesnakes continue to be discovered, there are currently about 16 species in the United States, 13 of which occur in Arizona. The most commonly encountered is the western diamondback, but species will vary depending on the habitat.If bitten, people should forget everything they’ve seen in old movies and heard as common myths about how to treat the bite. The best and only course of action is to seek medical attention immediately, and a cell phone is the most important piece of first aid equipment.While the Mohave rattlesnake is widely accepted as having the most potent venom, the diamondback accounts for the most bites. Snakebite deaths are extremely rare in Arizona.While less common within city limits, rattlesnakes can be found in urban environments, as can spiders and scorpions. There are two spiders considered a threat to humans in Arizona: the black widow and brown spider.Most spider and scorpion bites will not require medical attention, but individuals should pay attention to the reaction and seek medical help if the reaction is severe.As for lizards, the only one in Arizona that is venomous is the same one that can be easily avoided: the Gila monster.“Gila monsters want nothing to do with people, so if you leave it alone, it will leave you alone,” said Jones. “Gila monsters are protected in Arizona, so it is against the law to disturb, harass, or remove these animals from the wild.”See more information on Arizona’s venomous reptiles.