… memories of two consecutive days in February of 2018 when I flew to and photographed the peaks after a beautiful snowstorm. The photo above was taken early afternoon on the 16th and the view is looking up a ski lift and some runs coming down the ridgeline leading up to Agassiz Peak. The peak is 12,356′ and the shot was taken from 11,520 feet. Most of the Snowbowl runs are to the left side of this shot. The trees were powdered with snow or hoar frost and the entire mountainside sparkled in the sun. If you look close you will see skiers riding the lifts and coming down the slopes.

The shot below was taken late afternoon the next day, about a half hour before sunset and bathed the slopes in a golden light. There had been a loss of snow in the day separating the photos. The ridgeline of the lower photo starts about where the ridgeline ends on the left side of the first photo. The angle of the sun was casting the shadow of the peaks out towards the Painted Desert. Just above the shadow on the right side of it is Sunset Crater and on the left O’Leary Peak. The painted desert is beginning to glow and in another 20 minutes the shadow from the peaks extended out to the horizon and over the entire Painted Desert. The trail going to Humphreys Peak is seen just below the ridgeline. In this shot I was at 12,674′ which is above Agassiz and a tad above Humphreys which tops out at 12,637′. 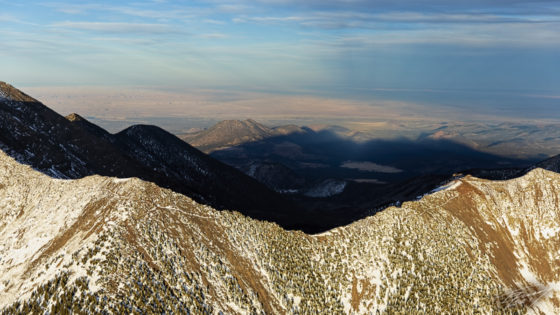 Typically in air to ground photography I use a high shutter speed because I want to capture detail in trees and other objects including the rock formations. Even though I fly fairly slow when shooting, my speed relative to the ground is at least 150′ per second; these two shots were at 1/4000th of a second which still amounts to a movement of .45 inches during the exposure which is insignificant at this distance … for air to air work, shooting other planes in flight, you pair up and there is relatively little differential in speed between the two aircraft so you can shoot at lower speeds and with panning you can keep the shutter speed down to 1/200th or less so that the propellers are blurred and not frozen … other than my kind of aircraft (sailplanes), propeller driven aircraft do not fly well with the props frozen 🙂

about two months ago I put out a video link re saving Oak Flat from foreign mining operations. Here is a link where there is information on how you might be able to help. Here is an updated video that Elias Butler has put out on the area … well worth watching!

Into a new week … pretty exciting with a lot of life to live and being able to choose how you feel about it … choose joy! Smile and keep breathing.

May I keep this vision of
the castle ever before my eyes,
and a belief in my heart
that the journey is worthwhile,
and the castle and the glow
in the windows not all illusion.
excerpt from Love And Faith by Max Ehrmann