Today’s Photo from Ted Grussing Photography:
The passing of a world renowned treasure

On Tuesday [May 20, 2014] at about 4PM near Slide Rock Park in Oak Creek Canyon a fire was started by what is said to be a camp fire. Within minutes the fire had engulfed 20 acres; in a few hours it reached 400 plus acres and within a day consumed more than 4500 acres and it is still going. The fire has also spread into and appears to have destroyed the West Fork area of Oak Creek … this was one of the most beautiful trails in the entire Sedona area. 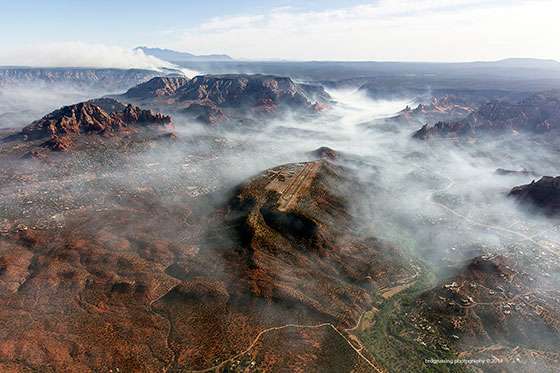 And from all reports and what I can see from the air, it does appear to be gone. Looking down from above it seemed like a chalk line scribed at a homicide outlining the body … here the forest being killed is spreading out in its final act and is beautiful in its own right … like all of us do some day, it has reached the end … for now … regeneration will occur and in another generation or two will once again attain a state of beauty. It will also be a wonder to go up there and see the beginnings as green begins to appear out of the ashes. And we are here … now … soon new life will appear.

Early this morning I took Jordon Reese the photographer for the Red Rock News up for an aerial shoot of the area; unlike helicopters which typically shoot from lower altitudes we climbed to about 12,000’ above the TFR area (Temporary Flight Restrictions) surrounding the fire which has a ceiling of 10,500’ so we could then fly close to the fire area. I like this shot a lot! :  This is a view looking to the NNE from a point about 4 miles SE of the Sedona Airport which is visible center right. The airport considered one of the most scenic in the USA sits on a mesa about 800 feet above the city of Sedona. To the right of the mesa and just below it you can see the famous Oak Creek (green snake line) which is obscured by the smoke above the bottom of the image. The creek wends its way upstream under the blanket of smoke filling Oak Creek Canyon to and beyond where the fires are burning miles above the base of the canyon. The mountain to the left of the airport is Thunder Mountain and is the mountain the Walt Disney used as a model for the Thunder Mountain in Disney’s theme park. Above and to the right of that is Wilson Mountain and the mountains partially obscured by the smoke plume are the San Francisco Peaks NNW of Flagstaff AZ – Snow Bowl a ski resort is on the mountain and Humphreys Peak is the highest point in Arizona at 12,633’ msl. Sedona Airport is 4830’ msl and the Colorado Plateau is about 7,000’ msl. Sedona is at the edge of the plateau where it breaks off.

Spent some time visiting with the flight crews of the Sky Crane helicopters, a breakfast at Mesa Grill and home.

I talked with Jordon a while ago and the front page of the Red Rock News will be covering the fire.

Derek just let me know that Arizona Highways just posted our collaborative blog which he just finished and the link to that is: http://arizonahighways.wordpress.com/2014/05/22/contributors-ted-grussing-derek-von-briesen-get-aerial-view-of-slidefire

Waiting to hear back from AP

Have a wonderful rest of the day … look forward to what will evolve and come out of this otherwise sad event … life changes … life is good.