… the photo above is a shot of Lake Pleasant that I took about fifteen years ago. The location is on the SE corner of the lake. Corky and I had an annual lease on a space for our motorhome at the RV park on the SE corner of the lake and there was also a large rec area that was included and which we could use. You are overlooking the marina area and looking NW across the lake at the foothills of the Bradshaw Mountains and the clouds are obscuring the mountains themselves. It worked out great for us because the motorhome had been made for Corky and she could function in it while I went soaring … Pleasant Valley Airport and Turf Soaring is only four miles from the RV park. After soaring, the park had a beautiful pool with a ramp entrance on one end, which was great for Corky … I would just transfer her into a manual wheelchair and we could both get a swim in.

One Sunday after church, Corky and I decided to go flying and look for the source of the Verde River and we did find it. The photo below was taken just north of the foothills on the north side of the Bradshaw Mountains and looking pretty much NNE. The Verde River runs N out of the mountains and wends it way through the Chino Valley and eventually close to the Perkinsville area, turns E and then flows through the Verde River Canyon to the Clarkdale/Cottonwood area and once past Camp Verde heads SSE towards Phoenix and a couple of man made reservoir lakes. As it passes through the Verde Valley it picks up water from Sycamore Creek and from Oak Creek. 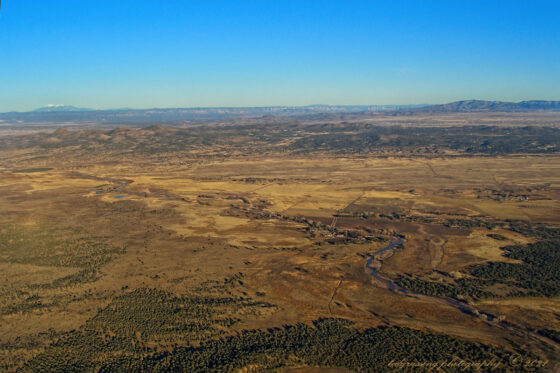 On the left horizon you can see the San Francisco Peaks, just right of them and lower is Mt. Elden … right of center the flat loaf like mountain is Mormon Mountain and the peaks on the far right and closer belong to Mingus Mountain. On the down slope on the north side is Jerome and at the bottom Clarkdale and Cottonwood. All along the horizon you can see where the Colorado Plateau ends and the rocks are visible … the Mogollon Rim … the red rocks are in the Sedona area. Over 100 miles to the San Francisco Peaks from here.

It is a fabulous world and life we have … seek beauty and you will find it … we always find what it is that we seek, so better beauty than all the rest that inundates us daily.

God grant me the serenity
To accept the things I cannot change;
Courage to change the things I can;
And wisdom to know the difference.
Living one day at a time;
Enjoying one moment at a time;
Accepting hardships as the pathway to peace;
Taking, as He did, this sinful world
As it is, not as I would have it;
Trusting that He will make things right
If I surrender to His Will;
So that I may be reasonably happy in this life
And supremely happy with Him
Forever and ever in the next.
Amen.
The Serenity Prayer by Anon and used by Alcoholics Anonymous since 1940
Max will be back tomorrow,