Today’s Photo from Ted Grussing Photography: Red Mountain … From Above And From Within

… a favorite volcanic cone in the San Francisco Volcanic Field is Red Mountain … it is a beautiful cone and the east facing side of the cone was blasted out a very long time ago. One possibility is that water was trapped in the side of the cone leading to a massive explosion when the trapped water was super heated to steam. It is also easy to access being just a mile or so off to the west side of SR 180 going north out of Flagstaff and twenty or so miles beyond Snow Bowl. Click on the link above to read more about it … and you will also see another one of my aerial photographs of the mountain. Many thanks to Arizona Geological Survey for the work that they do and the many photographs of mine that they use.

The amphitheater that was created is beautiful and it is an easy hike to get into it … towering hoodoos everywhere … the shot below is of my friend Bob in the Red Mountain amphitheater. Bob was a soaring pilot and retired professor of geology … he was one of several geologists and earth science people who have mentored me on the geology of northern Arizona. What once seemed like a barren landscape, came alive and reveals millions of years of earths history … it is exciting to go back in time while earth continues to evolve. 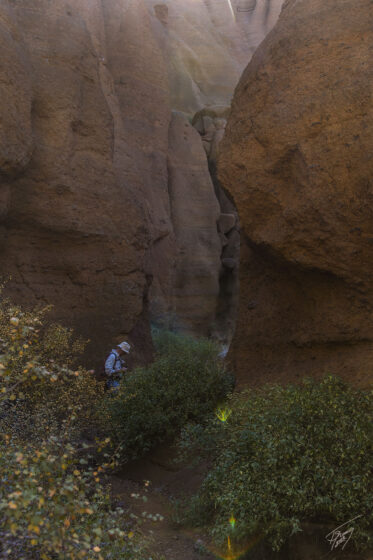 In the photo, Bob is down in the amphitheater where the tall pine trees are in the the lower portion of the top photograph … it is hundreds of feet to the top and this photo gives you an idea of the scale. Morning is the best time to visit it for photography as it faces east and is in shadow later in the day.

Another wonderful day is closed and I know the new day now begun will be excellent too … it is always my choice that it be so, and it makes the day so much more pleasant to travel through!

I do not understand this world,
This universe of life and growth and death.
I do not damn the Maker, saying still
Within myself that surely all is well.
The myriad stars shine nightly in the sky,
The earth yields forth her budding brood in spring,
And always dawn and noon and dark succeed;
Volcanoes burst and flooding rains descend,
And sprigs shoot forth where barren winter lay;
The piping winds bound through the bending trees,
And withered leaves again return to earth;
Soft lips grow hard and tresses gold turn grey;
Sweet babes are born, and stooping aged men
Depart into the soft and silent night.
And not one jot of all this can I change.

excerpt from The Task by Max Ehrmann