… do not take it personally, but when you get too close to wildlife they leave … just an instinct that helps them survive throughout the ages. I do tend to get close, for instance the great egret above let us get within ten feet before he flew … actually we bumped into the tree he was in, so make it about six feet, because he left when we bumped into the tree. In this shot you can see that he is spreading his wings to take the first stroke of those fabulous white wings and his legs are beginning to extend as he unloads and extends them for the takeoff thrust. It was a great fishing spot so he didn’t fly far.

The Avocets below did not want to fly either, even though we beached on the shallow spit of land that almost reached the surface of the water. They kept busily shoving those upwards curved beaks under rocks getting food. They finally had enough of us and decided to fly. Avocets are really cool shorebirds because when they takeoff they will fly in formation in an area within a couple of hundred yards of where they takeoff, make a few passes by the exact place and then come in and land at almost the exact spot they took off from … less than ten feet from us. I got this shot as they were doing a near pass with the Bradshaw Mountains as a backdrop. When the lake reaches its maximum fill sometime in February or March, the trees on the intermediate hill will be the new shoreline and this area will be under another 20 or so feet of water. 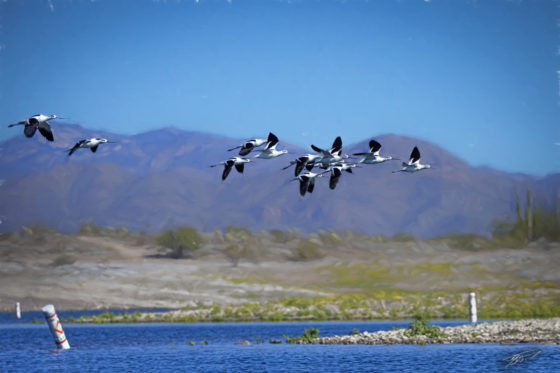 Some good shooting coming up this week, shooting raptors in Flagstaff on Wednesday, and back down to the lake on Friday. If you are photographing wildlife and would like to learn the ins and outs of shooting raptors, I am doing a workshop with Michele and Ted on December 4th. Space is limited … scroll down to the bottom of the page for more information.

Into the new day … adventure … life to be lived, awaits us, but first a few hours down time to refresh the body. Smile, we are all here at this moment … breathing too! Doesn’t get any better than that!

Though I know I shall sometime no more open
my eyes to the night or the day,
I am one who looks at the stars when unchained from
the work-bench at nightfall.
They are a sign that I am not ephemeral, nor you, nor
you, whoever you are.
The dawn comes and the dark and the sign sparkling
in the brooding night forever and forever.
At Nightfall by Max Ehrmann