Every once in a while it is fun to shoot the Sedona Airport (KSEZ) from different angles always looking for a fresh perspective … and another sale to the Airport … quite a few of my shots grace offices and the terminal building. The magnetic lineup of the runway is 032 and 212 in reality , and like all runways the numbers are the magnetic alignment rounded to the nearest ten degree number; thus if you land to the N on runway 3 you are landing on a heading of 030 on the compass rose which is to the NE and conversely landing on runway 21 is a landing on magnetic heading 210 to the SW. 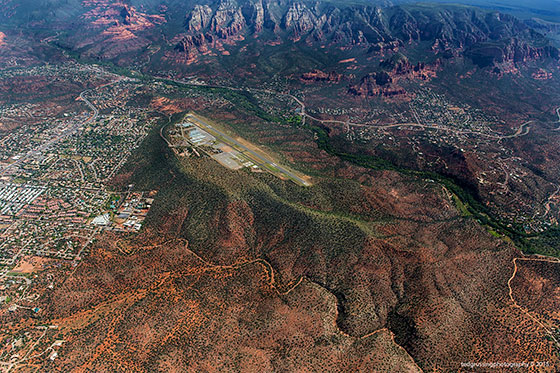 I like this shot as it does a good job of showing the nature of the airport sitting on top of the mesa and the runway which is 5132’ long by 100’ wide and runs from one end of the mesa to the other. Last night I landed on 21 into the sun, from left to right in this photo. The runway has an approx. slope of 2 degrees so landing on 21 you land downhill and on 3 uphill. My shade where I keep Mariah is towards the N end to the left of the two white hash marks on the runway. You can also see the road coming up the side of the mesa further left of that. The overlook  is at the top of the road where it turns in towards the mesa, then you have Sky Ranch Lodge on the right and at the end near the runway is the restaurant and on the ramp areas you can see a few private jets. On the left side of the image you have part of West Sedona and as you go up on the left there is uptown. The main road on the left is SR 89A. Oak Creek is in that beautiful green belt flowing from upper left to lower right. To the right of Oak Creek is SR 179 and from left to right it goes south to the Village of Oak Creek (not in image) where I live. Above  SR 179 towards the right side is the area called “The Chapel Area” and up on the left side by the rocks is the Chapel of the Holy Cross, which is a popular destination; also in that area there are Episcopal, Lutheran, and Methodist churches and a Jewish Synagogue ; Church of the Red Rocks is further north and just about directly opposite and to the right of the north end of the airport. Upper left you can see Schnebly Hill Road going up through the rocks to the right of the creek.

Today was a very good one … upgraded my wireless networks with a newer higher power dual band range extender and newer and faster dual band wi-fi adapters for the computers and have more than doubled my download speeds to the mid 30 Mbs download speed. Fun.

The dinner at the Hilton was great and Anthony’s music as always great. Mariah gets a wax job later this afternoon and some stone cutting again in the morning. Have been cutting some very beautiful opals that I have not had out for some time … fun. As soon as my new (extra) gas tank caps come (wing tanks and they screw in flush on top of the wing) I will tap the holes and rework a GoPro mount so I can mount the camera outside on the wing and think that may work well too. Probably will need to get another one too as I liked having the view of the instrument panel and straight forward look … need to learn a program to edit and combine different things and add a music track … much better than just the wind and engine noise.

Time to wrap it … have a wonderful day … you know it is when you open your eyes … you are breathing … what a terrific way to start the day! Then the espresso/coffee is brewed and the sun instantly shines brightly … Caffeine!!!

Give me to glady go
My way and say
No word of mine own woe;
But let me smile each day
— Max Ehrmann