Verde Valley AZ (March 10, 2014) – Senate Bill 1389 will educate Arizona’s kids on the consequences of non-medical marijuana use, much as was done with tobacco.  But some are objecting to the bill. I have to ask: Why would anyone object to educating our kids about the harms of using marijuana? 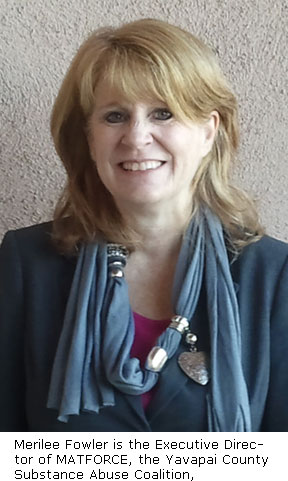 Marijuana is an addictive substance that negatively impacts the development of the adolescent brain.  One in six kids who use marijuana will become addicted. Early and regular use of marijuana can result in a long-term decrease of 7-8 IQ points. Use of marijuana by kids hijacks their brain’s natural reward system causing a decrease in motivation and ambition, and a decrease in cognitive functions.

Arizona’s youth are smoking marijuana at an increasing rate; it now exceeds cigarettes! One in five 12th graders use it regularly. And they are using marijuana at a younger age. We are now providing curriculum to elementary schools.

Kids think marijuana is harmless. Why? Because, as they repeatedly tell MATFORCE educators, “It is medicine; it must be harmless.”

MATFORCE is the Yavapai County Substance Abuse Coalition. Last month in Washington D.C., MATFORCE was awarded the outstanding coalition out of more than 5,000 coalitions nationwide. Having served as the executive director since 2007, I have helped lead successful efforts to combat all substances of abuse, including methamphetamine, synthetic drugs (aka bath salts and spice), and prescription drug abuse throughout our county. Educating on the harms of marijuana is our most challenging task yet.

Since the passage of Arizona’s Medical Marijuana Act, marijuana has become much more accessible, both legally and illegally.  We know from the Arizona Youth Survey that over 11% of kids who use marijuana obtained it from a medical marijuana cardholder.  Unlike the clear messages from adults that guide our kids with respect to methamphetamine, heroin, and synthetic drugs, the messaging around marijuana is hazy and ambivalent.

You can help create healthy communities within which our kids can thrive and succeed. Urge your senators to support SB 1389. Find your Senator at Azleg.gov.

Learn more about marijuana at the National Institutes of Health drug abuse website at http://www.drugabuse.gov/publications/drugfacts/marijuana.