Because of the size of the spill, quick response and fact that this spill is miles from Oak Creek, no effluent went into the creek, any tributaries or sensitive areas.

Untreated liquid effluent was reported to be coming out of a manhole in front of 3250 SR 89A and flowed across the highway and into a storm drain on Arroyo Pinon Drive where it was contained. The city disinfected with chlorine all areas where the effluent touched including the roadway and storm drain, and cleared the blockage in the sewer line.

“Tree roots can infiltrate the sewer system and grow rapidly because the sewer is an abundant source of water and nutrients for vegetation. We inspect our sewer lines on a regular basis to look for signs of roots or other debris that can cause a backup. This instance appears to be one where the roots grew so rapidly between inspections that a complete line blockage occurred,” said Roxanne Holland, director of wastewater, city of Sedona.

Map of spill area below: 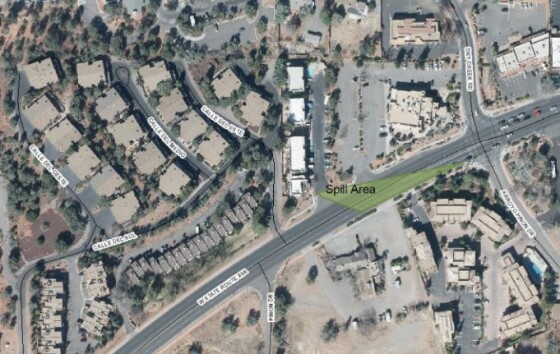