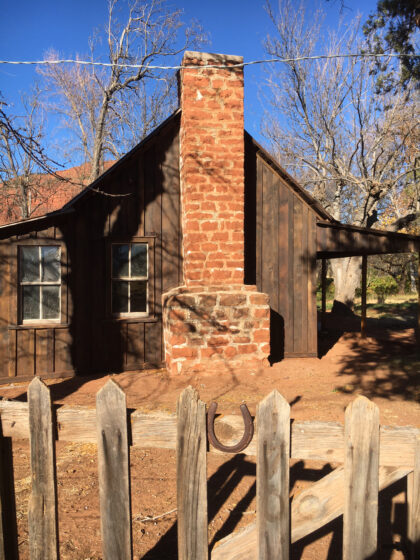 Sedona News – The Sedona Historical Society will host a tasting event of the first bottling of Red Rock Zinfandel since 1917 on Friday, March 25 from 5 p.m. to 7 p.m. at the Sedona Heritage Museum. This tasting is in partnership with Page Springs Cellars and winemaker Eric Glomski.

The evening will include the tasting, appetizers, other PSC wines, an auction, and special guests. An introduction to the wine and the story behind the preservation of 100+ year-old legacy vines and the rebuilding of a legacy vineyard will be presented by the winemaker, Eric Glomski.

After more than a century, the Sedona area’s first commercial vintner Henry Schuerman’s vines are again producing. This wine is the culmination of almost three years of cooperation and work by the Society and Page Springs Cellars in attempting to replant a vineyard of Zinfandel wine grapes beginning with a handful of vines saved by the Schuerman family.

The family’s story holds a prominent place in Arizona wine history. The Schuermans operated the first commercial winery in northern Arizona, and maybe the entire state, from 1884 to 1917 when Prohibition laws took effect. After being jailed for illegally selling the last of his wine, Schuerman was pardoned by Arizona’s governor. A special guest appearance by Henry Schuerman himself, as portrayed by professional actor Michael Peach, is expected so ‘Henry’ can share his personal story.

This first bottling of Red Rock wine made from preserved vines hailing from the original Schuerman vineyard is a very small initial offering and will only be available at this and another later event at the Sedona Heritage Museum. Tickets are $100/person in advance, limited, and available at SedonaMuseum.org. Proceeds go to the Schuerman Homestead House Preservation Fund.